The hard work of mezzadri

As many young adults in my region, I am a proud granddaughter of two hard-working farmers. My grandparents, and before them, my grand-grandparents, were tenant farmers or, as they were called in Italy “mezzadri”. Mezzadria was a system of feudal land tenure whereby a farmer, namely my grandparents, paid half of the farm’s produce as rent. Before that laws, even permitted to give 60% of the production to the owner, but these were hard, and strict, times. My father grew up in this system, since he was born in 1958 and left his house in 1976, 6 years before mezzadria was abolished.

You can see my grandmother working hard on the farmyard, in the photo above, or all the family, my 10 years old dad too, working in the fields with two enormous oxen. 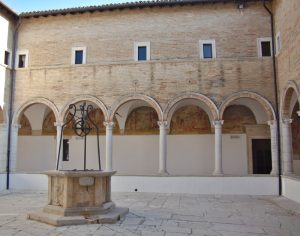 Given that mezzadria is part of the marchigian tradition, the Museum of Mezzadria’s History in Senigallia is definitely worth a visiting. It hosts 2000 objects, divided in 6 topics: wine, olive oil, grain, tools, daily life and the other activities of a mezzadro. Since 1978 this agricultural museum has seized part of the 15th century Santa Maria delle Grazie monastery. The access is free and we there brochures in Italian, English, German or French to choose.

I grew up only listening to past stories from the past, but every time I watch a particular tool, I can immediately guess what its original function was. 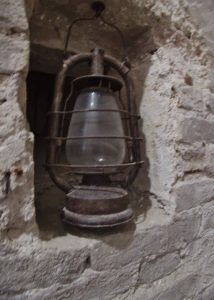 When I was a little girl, I used to dream entering the cellar of my grandparents’ house, only lit with kerosene lamps, smelling the wine perfumes from the tini (vat) and watching the men working the grapes, and the women sewing the hemp on the looms. I also wondered on the function of many tools, whose use was by the time more than outdated. For example, I could not even imagine, not even as a little dreaming kid, that this was a forage grinding machine, whose wheel was to action the machine to chop up the forage. 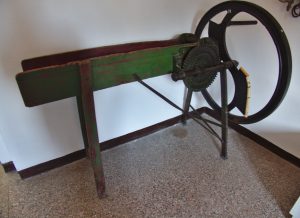 The museum perfectly depicts the everyday life of a mezzadro, but not only him. Speaking of tradition, indeed, in the 19th century, it was also common to grow silkworms. Women and girls could earn something by feeding the insects intensively with mulberry leaves until they developed into cocoons. In 1837 Jesi created the first silk factory, at the end of the 19th century, 40 factories provided employment to numerous women. The last factory closed its doors in 1966… Hence the numerous old mulberry trees in the landscape.

Does your country have the same agricultural tradition, maybe even with the same tools?

More information about the museum can be found on their site

Where is the museum? Look at Google

PS. Here’s a little secret I’m telling you, above all the tools that are part of (my) marchigian tradition, I love biroccio, the beautiful painted agricultural cart that has even a whole museum dedicated to (of which we will talk about later on). 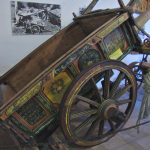 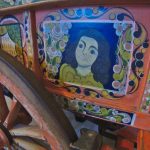 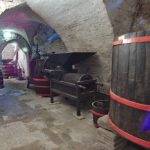