Hold your head up, possibly with a hat from Montappone on it!

So far we only talked about food or agricultural tradition, but not mentioned that from food, grain in particular, not only pasta can be made. Today we talk about the famous “hat-art” production in Montappone, in the area of Fermo. Hats in Montappone are a synonym of long tradition and enthusiastic people, such as the employees that guided us through the Museo del Cappello, the Hat Museum. Thanks to Mr. Armino, you can enter the magic world of hats, especially those made of straw. 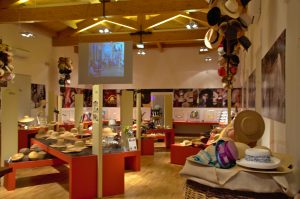 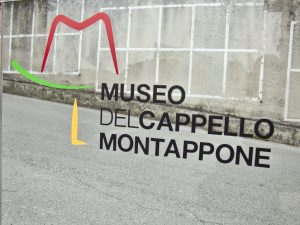 But what has all this have to do with the grain I mentioned before? It’s with a special kind of grain that the tour in the museum begins, indeed.  People from this area for centuries harvested the Iarvicella grain, a special grain that was gluten-poor and rich in fibre. 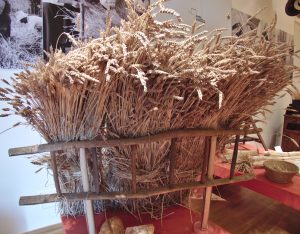 Of course, as we all know, grain is used to produce bread or pasta, but what remains of this production was also used for straw hats. What is needed are the long culms: initially workers cut the culms, sorted them and ended up to bleach and be disinfected with charcoal and sulphur. If this was not done, the straw hats would have an ugly colour but also mould. Later on, this process was done by wooden sorting machine.  The stalks were then assembled to meters long strings: this happened in the farmers’ daily life while walking and it was done by the whole family, from the 4-year-old preschool to grandfather and grandmother, everyone fought along. The long strings were then sewn together and the hat was finished. 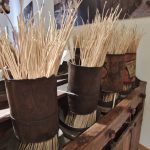 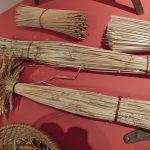 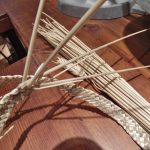 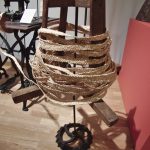 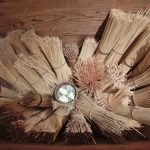 Working in the fields meant to be under the hot sun for many hours: this is why in the past no one left home without a hat on his head. Of course they had to use the cheapest material around, and this happened to be the straw.  Centuries of handicraft slowly evolved into machine production at the end of the 19th and the beginning of the 20th century. This eased the work and made the production possible on a large scale. Everyone in the land could use such a straw hat and they were sold door to door. In the museum you can spot a photograph of such a salesman with a big stick on his shoulders with different hats hanging on it. Hats must not have been so heavy, but how many kilometres on foot did this man travel by day, uphill, downhill? With the risk of being attacked by animals or robbers, he thought of a stick with a very sharp point: still something like a weapon with him.

You don’t only experience the hat-life in Montappone, but bags and fans made from straw. One department bears the name of “The Crazy hat” a project in which important Marchigian companies or amateur people had to create a special hat. You’ll be surprised by a spaghetti hat from the famous pasta factory in Campofilone, a gold hat from goldsmith Gina Galieni and many original designs. Another extra reason to see this with your own eyes! 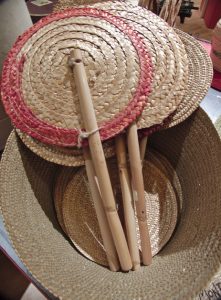 In this way, an important hat industry was slowly growing around Montappone and the neighbouring towns of Massa Fermana, Monte Vidon Corrado and Falerone. This long tradition has not prevented the artisans to try new materials to produce hats: willow wood, wool, felt, linen etc…. Nowadays they make here still 70% of the luxurious hats for high-quality fashion from all over Italy and Europe! The best part of this museum, maybe comes at the end: after having wandered around a thousand hats, you can choose and wear one of your own and take a photo as a souvenir!

If the museum appealed to you, you may still be surprised at the end of the visit about how such a small municipality of just 1500 inhabitants was so important for hat production in Europe. And if you are a little dreamer like me, you could also go back to the piazza of Montappone, by singing to yourself Joe Cocker’s famous song: “You can leave your hat on..”.

For the time being, visits are only on request by calling: +39 0734 760 134. On request also English guided tours possible. Entrance fee 2.5 Euros. In July there are the hat parties where one can still see hat-makers at work.