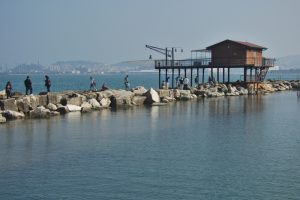 Do you remember when we enjoyed the FAI events in Spring? Well, it’s time to visit some new hidden treasures, with their autumn counterparts: le giornate FAI di Autunno (Autumn FAI days). For those who lack long lasting memory, FAI (Fondo Ambiente Italiano) is the Italian equivalent of the British National Trust. Every year, on different and many occasions, the local FAI Associations organize open days in which visitors, tourists and also locals can discover something new!

And this was exactly our case! The road that leads to the centre of Ancona, namely Via Flaminia, is probably one of the most highly congested road of our region. Yet, it has still some secrets to unveil. Along the Adriatic Sea beach, indeed, there is a restaurant that seems to be magic..how is it possible to get there? Thanks to FAI we got the answer!

But let’s start from the beginning! The topic of this year Autumn Open Days was water, and we decided to visit the fishermen’s houses on stilts, called Pesche. The visit was lead by local ex-residents of the former village called Borghetto or Borgaccio of Ancona. Until 1982 they were about 3000, forming a real village just outside Ancona, living off the fishing that occurred with the large nets on the stilt houses. In December 1982 a big landslide destroyed not only the village but also the road and the railway, hindering the people to come back because of the instability of the ground. 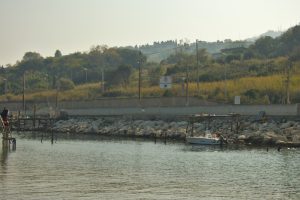 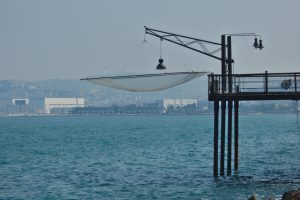 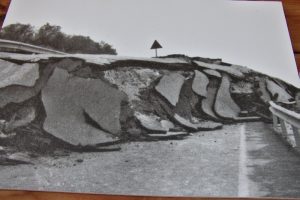 No interesting visit should end without eating in Le Marche. Indeed, the restaurant called La Vecchia Pesca (the old fishing catch) was there to help our rumbling stomachs. It was built in 1962 and rebuilt in 2016 after a big storm, and since the beginning the specialty was the seafood directly from the Adriatic Sea, of course! The cook tries to connect local traditions with flavors from other regions, and so we decided for the delicious raviolis with sepia ink filled with ricotta, and spaghettini with seafood. 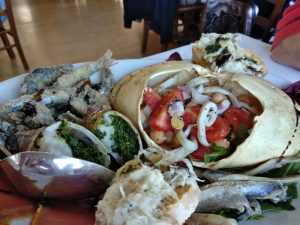 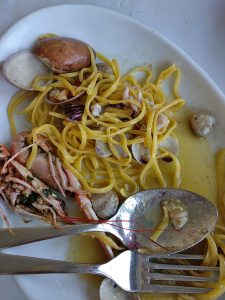 The tricky part is how to get there! And here’s our insider tip: when you are on Via Flaminia along the sea, direction Ancona centre, past the Lidl shop and the car dealer Bartoletti on the right, just before the big signboards, you can find the parking lot of the restaurant. You park there and then via a staircase and a tunnel you reach the other side by the sea and the restaurant. 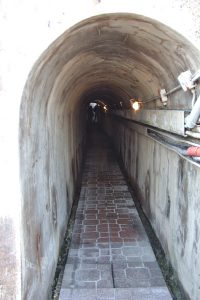 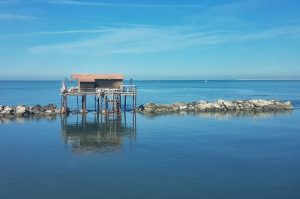 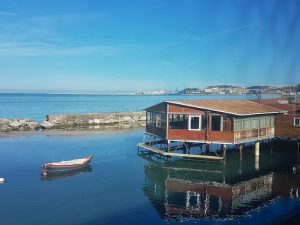 Detail of the restaurant