Gradara: where the love comes to its fullest 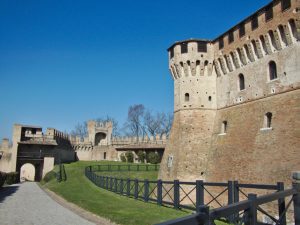 Once upon a time there were two lovers who could not live their love fully. This may be the beginning of several love stories, but the one that took place in Gradara is unique and tragic at the same time.

We are in the romantic castle of Gradara, on a top of a strategic hill, in the northern part of Le Marche. If you come from North it is impossible not to spot it welcoming you to Le Marche, in the same way it had spotted so many enemies from other Rimini’s territories. Its strategic position has been the main reason of the quarrel between Malatesta, Sforza and Della Rovere. 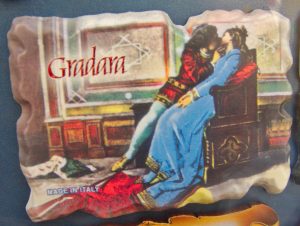 It was at the time of Malatesta, sometime between 1283 and 1286, that Paolo and Francesca literally died for love. Francesca da Polenta married Giovanni (‘Gianciotto’) Malatesta by proxy, meeting his future husband’s handsome brother Paolo pretending to be him. Francesca was shocked when she discovered the real appearance of her husband: an ugly and very unpleasant man. While Gianciotto was in Pesaro, Paolo kept Francesca’s company, reading to her from romantic books, especially of Lancelot, the Knight of the Round Table who fell in love with Guinevere, the wife of King Arthur.  They managed to carry on a madly romantic affair for some ten years, until Giovanni ultimately caught them in Francesca’s bedroom. Paolo tried to escape, but his cloak caught on a nail, and the two lovers were stabbed to death.

Sometimes, when there is a full moon, the ghost of a lady can be seen walking slowly along the battlements; the legend has it, it is Francesca’s.  Hence hers and his lover eternal wandering in Dante’s Inferno, V Canto, Divine Comedy:

Love, that on gentle heart doth swiftly seize,
Seized this man for the person beautiful
That was ta’en from me, and still the mode offends me.

Love, that exempts no one beloved from loving,
Seized me with pleasure of this man so strongly,
That, as thou seest, it doth not yet desert me;

Love has conducted us unto one death;
Caina waiteth him who quenched our life!”
These words were borne along from them to us.

This romantic atmosphere reaches its fullest during days around St. Valentine’s day, although is present all year long!

The castle itself is worth visiting: it is in such good conditions, thanks to a private wealthy engineer, Umberto Zanvettori, that dedicated from 1920 his life to restoring it. Before him, several owners followed one another: even Lucrezia Borgia lived here for three of the five years of her marriage to Giovanni Sforza. 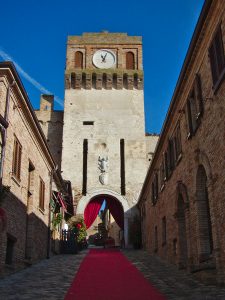 During the event Gradara d’Amare, occurring some days around St.Valentine’s day, the entrance through the gate, Porta dell’Orologio, is even more magic: a red carpet, red hearts and flowers welcome all lovers coming admiring it.

From here, it is possible to walk along on top of the walls, or if you prefer, to climb the steep main street, with medieval houses and little bottega (small shops) on either side.  There is another set of wall that separates the township from the awesome Rocca, where probably the love story took place. A maze of carefully furnished rooms (admittedly no longer with original antiques) is decorated with frescoes and paintings, to finally arrive in the room of Francesca, where the nail that impeded Paolo’s escape is still visible. During the 3rd weekend of July, this medieval love story is reenacted.

There are also some precious works of art, including the Madonna on the throne surrounded by the patron saint of Gradara painted by Giovanni Santi in 1484, the father of the even more famous Rafaello, and in the house chapel a beautiful altarpiece by Andrea della Robbia from 1480. 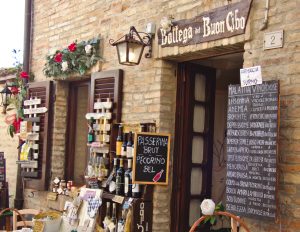 From the castle you can enjoy a beautiful view of the whole area, being situated only 3 kms far from the sea. The hungry stomach does not have to suffer long in Gradara, plenty of choice for trattorias, pizzerias and restaurants. In honor of Valentine’s Day, you shall not miss “Il Bacio” (the kiss) where you get a free dessert with the famous baci di dama and a heart-shaped cherry pastry.
On the way to the Porta Nuova, don’t miss the parish church of San Giovanni Battista with a 15th century wooden Crucifix on the altar.

Did you think I forgot something, didn’t you? Well, of course, you should stop by some bottegas, in which you can find sustainable products from the neighborhood. We suggest “Bottega del Buon Cibo” where the owner knows the production story of every delicacy.

So, if you forgot to take a present for your lover on St. Valentine’s , you’ll have still a chance to make a perfect impression: food is always appreciated!

Ecco Le MarcheOstra Vetere is one of those places that you have never visited, although being very close to you. Because, what do you think you can find there? Well, apparently, a lot! Isabelle and Read more…