Italy has been rewarded with so many quality brands, namely blue, green, red and orange flags, that sometimes it becomes tricky to know what’s behind those colours. To make things easier, we will talk about one of them, by presenting a village that has gained the Bandiera Arancione (Orange Flag). Orange flags are quality brands that recognize the ability of an inland village to make tourism coexist with the local environment, the culture and the traditions.

Serra San Quirico has all these characteristics. This little treasure patrols the Gola della Rossa gorge and with its strategic position appears to be a perfect dream location. 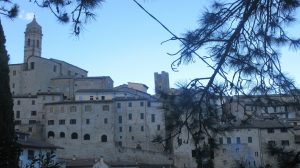 Climbing the route up to the village, the eye immediately catches the unique copertelle: Longobardic walls with houses built on top of them, that form covered streets used by tradesmen and craftsmen. Serra San Quirico has always been tightly linked to a learning tradition: in the 16th century there was a famous school of Greek, and nowadays, despite its few inhabitants, it perseveres a famous theatre fair, both for children and adults. Hidden in the labyrith centre there is the Cartoteca Storica Regionale delle Marche, a unique collection of maps and old paper card games, from the 13th – 19th centuries, that is unfortunately closed at the moment. (We will keep this post updated, if it would open any soon). 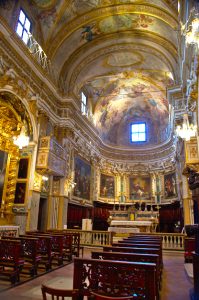 Worth to visit is the church of Santa Lucia, beautiful example of Baroque style, definitely in contrast with the not so far Romanic Abbey named after St. Elena, that protects the valley and gathers curious tourists for its semplicity. Built in the 17th century by order of the Silvestrini monks on the spot where an older church from the 13th century stood, it has gilded altars, stuccoes and many paintings. 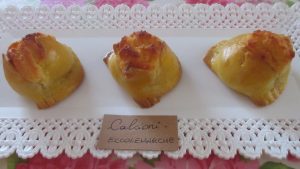 Speaking about food (would you imagine a post on Le Marche, without any mention to food?!), Serra San Quirico is the one and only homeland of calcioni.

It is a special dessert/snack, both savoury and sweet, perfect to start or to end a lunch. Is it magic? Nope, just made in Le Marche 😉 It is filled with pecorino romano, lemon and egg: literally a cheese volcano! You can get them at Panificio e Pasticceria Mattiacci in the city centre, next to the ex church of Santa Maria del Mercato, now transformed into a tiny theatre. There is even a sagra, popular festival that promotes a gastronomic product, devoted to it, at the end of April/ early May, la Sagra dei calcioni.

Despite its little dimension, Serra San Quirico has lot to offer! In April-May, there is a national school theater festival, where professional actors organize theater workshops for all surrounding schools.

In December Serra San Quirico undergoes a metamorphosis and becomes Bethlehem City for a few days. Figurants dressed as Jesus’ time- and compatriots populate the streets and celebrate the Nativity. In Italian this magic celebration is called presepe vivente (living Nativity).

Not to miss is the fiabesque “Paese dei Balocchi”, named after Pinocchio’s tale (it could be translated into Candyland). In July for two days the whole village is closed to traffic, and children are the only admitted. The streets become long slides; rooms open to puppet theatres, clowns and bubble artists; square turn to be giant play arena, with old and new toys. Every child wears its “donkey ears”, because, as Pinocchio did, if you stay too long in the Paese dei Balocchi, you become a dunce yourself!