“This lonely hill was always dear to me”

This lonely hill was always dear to me

Which cuts off the view

Of so much of the last horizon

The hedgerow in these beautiful verses was the hedge that Giacomo Leopardi hated and loved during his youth in Recanati. The famous poet, one of the most important and literary changing author in Italy, was born in Recanati on the 29th of June, 1798. A beautiful and applauded film from 2014 tells the controversial, woeful and profound life of this pride of Le Marche. It was selected to compete for the Golden Lion at the 71st Venice International Film Festival and it was also screened in the Contemporary World Cinema section at the 2014 Toronto International Film Festival.

Recanati, a village near Ancona, shaped the author’s life and all the poetry following his years far from it. At that time, Recanati was under the Pope rule, and Giacomo was forced to study theology, philology and many languages:  Latin, Greek, Hebrew, Aramaic and English. Nevertheless, it turned out not to be very difficult: the library in his palace in Recanati had thousands of thousands of original books, gathered by his Count Father, which had nothing to envy to modern public libraries. The screen gives the idea of the importance of the books in Giacomo’s life, but moreover, underlines the role of his parents in denying him abroad journeys. He was indeed very fragile, and physical affliction forced him to stay in Recanati.

In the first part of the film, the Italian version also reinforces the differences between the refined language (both spoken and written) of the Leopardi’s family, and the person’s dialect. Also Silvia, to whom Leopardi dedicated the beautiful A Silvia, spoke with a strong accent, that you may encounter also today in the surroundings of Macerata. Another difference was also in the richness of the family: they used to eat with silver forks and knives, while people could only eat bare hands.

The only escape from Recanati, at the beginning only spiritually at least, was the letters that Giacomo wrote to Pietro Giordani, a revolutionist of the time. Giacomo used to write them on the small desk in front of the window in one of the library rooms: the wooden desk is still there in the house, that has now become a private owned Museum. In the Museum you can also see the original writings of Giacomo, and if you watch the film before visiting it, you can imagine him while writing on his curved posture, totally absorbed by the magic of words.

Despite all the ease in Recanati, Leopardi wanted to escape from it, even if Giordani himself remarked “Your land is a pleasant, healthy place”, why would he run from it? He eventually moved to Rome, Florence, Pisa and Naples, but it was not the place that mattered but his reflections on the human condition: unhappiness is a problem that affects the human essence, and there is no solution to it.

I think the film perfectly depicts his life and how Recanati and his youth affected his entire poetry. Since it has also been screened during the Toronto Festival, you can find it also with English subtitles. It is certainly not a happy, light film to watch, but I personally recommend it before visiting Recanati.

PS. The film also mentions other villages around Recanati, such as Macerata and Loreto, where Leopardi went with his brother and Pietro Giordani while visiting. At 1.40.00 the film also shows a Rossini opera played in Naples, after being censored in Rome. It is there that Giacomo Leopardi remembers his motherland (remember that Rossini was born in Pesaro) and starts to wonder to go back. He couldn’t make it: he died too young, in Naples after healthy serious problems. 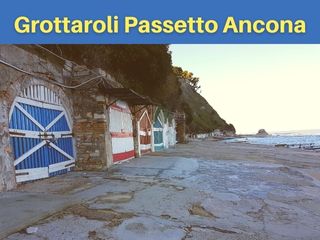 Ecco Le MarcheWe already told you about the Passetto of Ancona, the simple but picturesque beach of the Anconetani with its colorful fishermen’s houses. These huts are actually caves carved into the rock by generations Read more…