Nope, it’s not the beginning of a battle, or at least, not a battle as you normally intend it. It’s a sweets&chocolate battle! We are in Fano, a village by the sea in the northern part of Le Marche. And we are celebrating a special event: the oldest Carnival in Italy from 1347!

The people of Fano take their Carnival very seriously and you have no excuse to miss it: there are three appointments before Carnival that are similar one to another (on the three Sundays before Shrove Tuesday). To live the atmosphere without any stress, I’d suggest to come by train: the city centre is only 10 minutes far on foot.

In the mornings the joy is spread by children, but at 3pm o’clock, right after the cannon shots, the enthusiasm is so contagious that also the adults have real fun! It’s not uncommon to see entire families all dressed up. 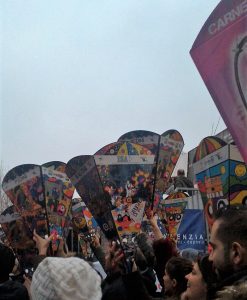 But let’s talk about the battle: during the parade enormous papier-mâché satirical figures on floats wobble around, accompanied by music, dancing, and people throwing chocolates at the crowd!

Yes, they are really throwing chocolates. Each float has an average of 100 kilos of chocolates to be thrown at the people assisting at the parade. To be sure to win the battle you’d better harm yourself. Take a bag or a “raccogli-getto” (pick-up cone) to put the sweets in and be careful not to be hit by a flying-chocolate! 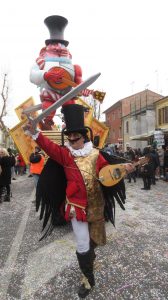 back to 1450 when Carnival in Fano was officially approved by statute.

At that time the peculiar moments were the races of horses and donkeys, after which the winners threw honey cakes to the crowd.

There is always a funny character opening the parade: “El Vulòn”. He’s THE satirical figure of the mania-of-grandeur. He wants money, women and all! Indeed, the name may be paraphrased with the French habit of stealing every richness from Italy between 1805 and 1814, namely in French “nous voulons” (we want).

Each year the number of floats may vary, but not the enthusiasm, music, dancing and shouting on board! The topics change in each edition, therefore you can go and take part in it every year from now on!In the 2018 edition one of the main float was dedicated to the city of Urbino and its most famous character, Raffaello the painter.

Another one was entirely representing the famous compositor Rossini, born in Pesaro. The float is a giant open theatre with the most famous Rossini opera pièce.

Of course, if there is an opening float, there’s also a closing one:  the Musica Arabita float. This band is all out of common as far as their instruments are very simple yet very original!

As the sun goes down, the parade makes its final tour: the Luminaria. The floats are enlightened and the atmosphere is even more magical! 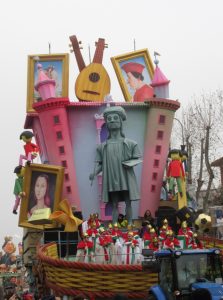 A float representing the city of Urbino and the painter Raphael 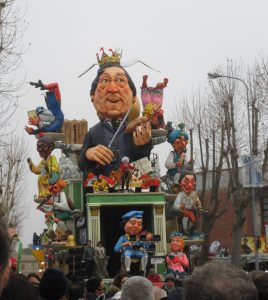 A float on Rossini and his pieces 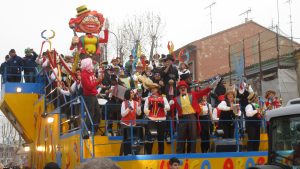