Nothing to envy to Siena: the tradition of palio in Le Marche

I do not want to put other regions in a bad light, but while looking for some English pages on palio in the web, I only encountered the proportion Palio : Siena. That’s not fair!! The palio tradition can be found everywhere in Italy, and not only by meaning a horse race. In fact, palio is not the word describing a horserace (or, THE horserace), but the banner or cloth cherished by the winner contrada, or neighboorhood, of a competition. And the competitions may vary a lot! 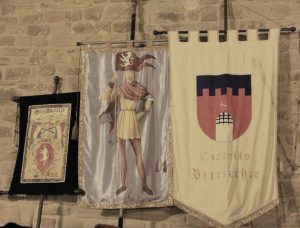 But let’s jump back into medieval times, when counties were ruled by very rich families, to which the nearby villages would pledge their sword. We are around the 13th century, and the medieval castle is about to host a ceremony in which all the lords must show their loyalty to the landlord, by showing their banners. Banners can have an image, a symbol, or simply a drawn castle on it, and should be shown in order to preserve peace. If a lord refuses to show his banner, the castle would be immediately punished with a military attack.  The lords usually own small castles, from which the word castello, as a synonim of land under the mastery of the ruling lord, comes from. 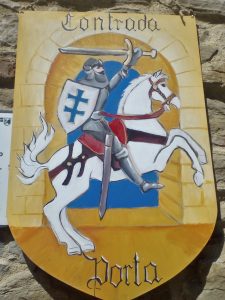 Jesi, a village in the surroundings of Ancona is a perfect example of what was going on during the medieval times. Every year the 20 local castelli had to prove their allegiance to the main landlord, and usually the perfect day was the day of the Saint Patron of the village, Saint Florian, on the 4th of May. At that time, the deputies of each castello wore a great banner, the palio, and presented it to the lord, who then knew that he could count on the loyalty of this ally. Seen the importance of the event, there were of course great festivities, such as traditional songs, music, big banquets, markets and tournaments, as well. 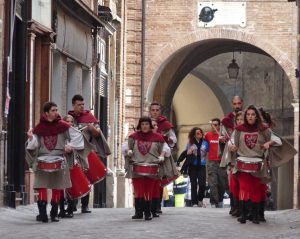 Therefore, the tournament was only a part of the bigger festivity, and not even owned a proper name. Nowadays, the reenactment of the palio usually takes place in beautfiul and coloured villages, all dressed up with the proper flag of the contrade or porte (gate), depending on the geography of the village. Remarkable parade boast the presence of the knights on horseback, their pages, and of course the lords and their ladies, part of the young nobility. And then the tournament itself: which contrada would be victorius this year? As every good tradition in Le Marche, there is of course good food and wine awaiting, all accompanied by jugglers, waders and traveling musicians. 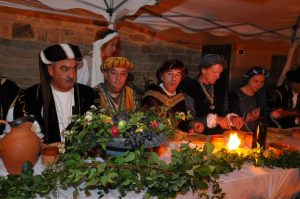 The characteristics of the tournament really depend on several factors: it can be related to an old tradition, somehow religious (il Palio dei campanari in Precicchie, in which the participants ring the big bell of the local church, playing stunning melodies), or related to agriculture  (such as the Palio dell’Oca, with geese in Cagli) or hunting (Palio del Cinghiale in Mondavio, in which there is the reenactment of the boar hunting). In Cupramontana, the capital of the white Verdicchio Wine, people from the contrade (neighborhoods) hold against each other a contest for those who can roll a barrel of wine the fastest. Also this palio takes place on the Saint Patron day: 26th of May. Not to forget maybe the most famous palio in Le Marche: Palio della Quintana, in Ascoli Piceno, which is a horserace competition which takes place in July and August. 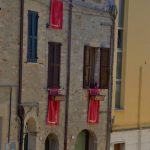 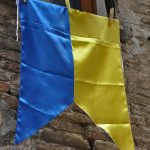 Particular colours of a banner 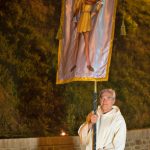 Pledging the loyalty to the lord

If you come to Le Marche, especially from Spring to Autumn, you’ll certainly have the chance to experience of those palio, or maybe all of them!