An insight look to Victoria Accordions – thanks to Marchecraft 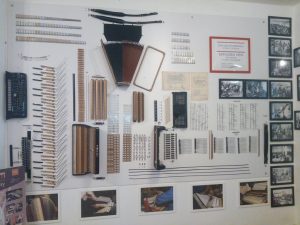 “Explosion” of all the accordion’s pieces

How many pieces do you think a music instrument is made of? Well, this is a really tricky question, you may say.

Some instruments look like really easy, and some other definitely not. Among the most complicated music instruments we can include the accordion, the King of Castelfidardo, a village of 18.000 inhabitants, not far from Ancona. In Castelfidardo there are about 50 accordion factories, one factory every 350 inhabitants!

We asked Federico Brocani, from Marche Craft, if we could join a guided tour to the historic showroom of Victoria Accordion, and he kindly set up a tour for us right during the PIF, the International Accordion Festival.

The showroom of Victoria Accordion is situated in the centre of Castelfidardo, and from outside you can already feel the magical atmosphere…is it maybe because an accordion is being played right now?

We entered the showroom and we were welcome by dozens of beautiful accordions showed in all their majesty. Elke Ahrenholz, the current owner, accordion player, artist, teacher and much more was busy with some customers (do you believe that the accordion market is still so lively?), so her assistant Linda guided us through the history and the mission of this artisanal “enterprise”.

The entrance to the showroom 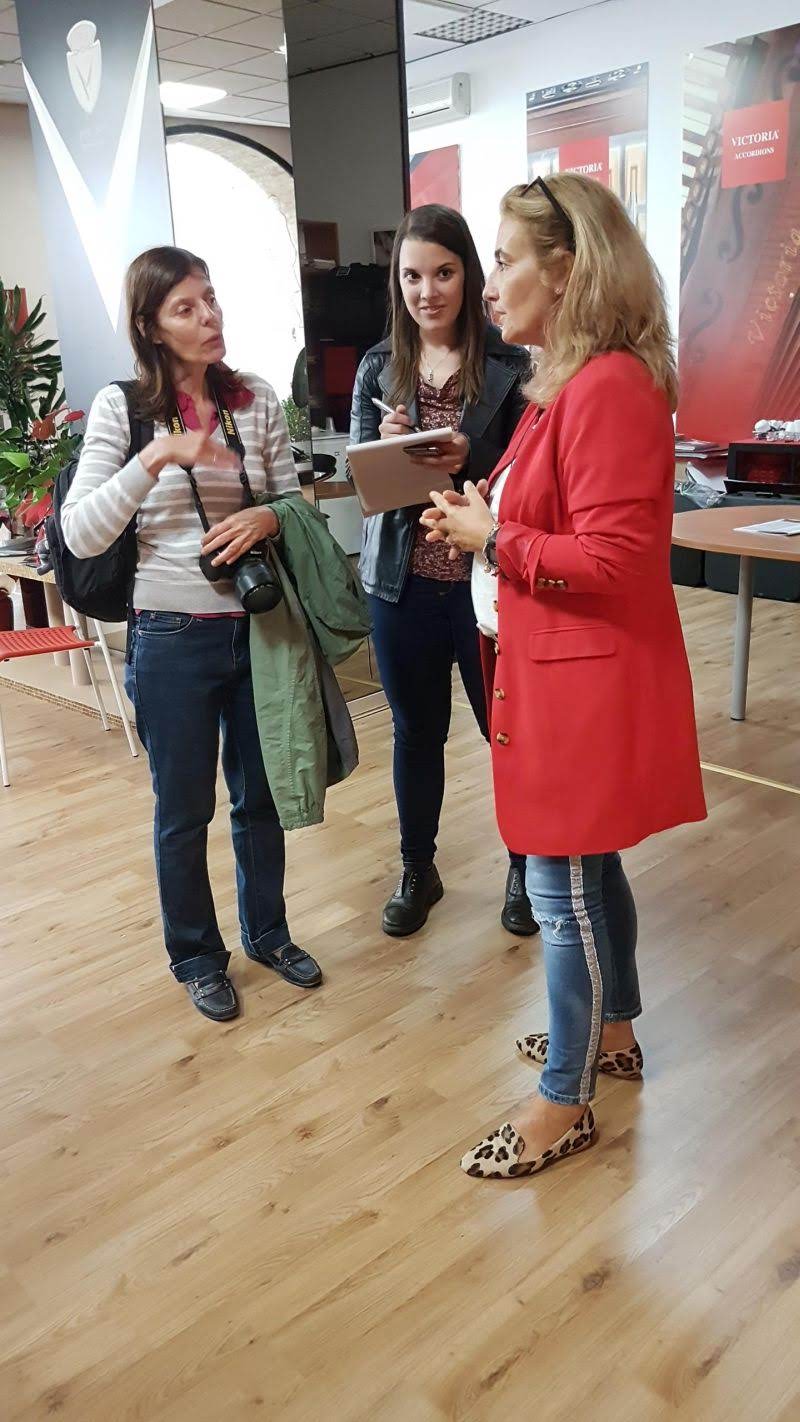 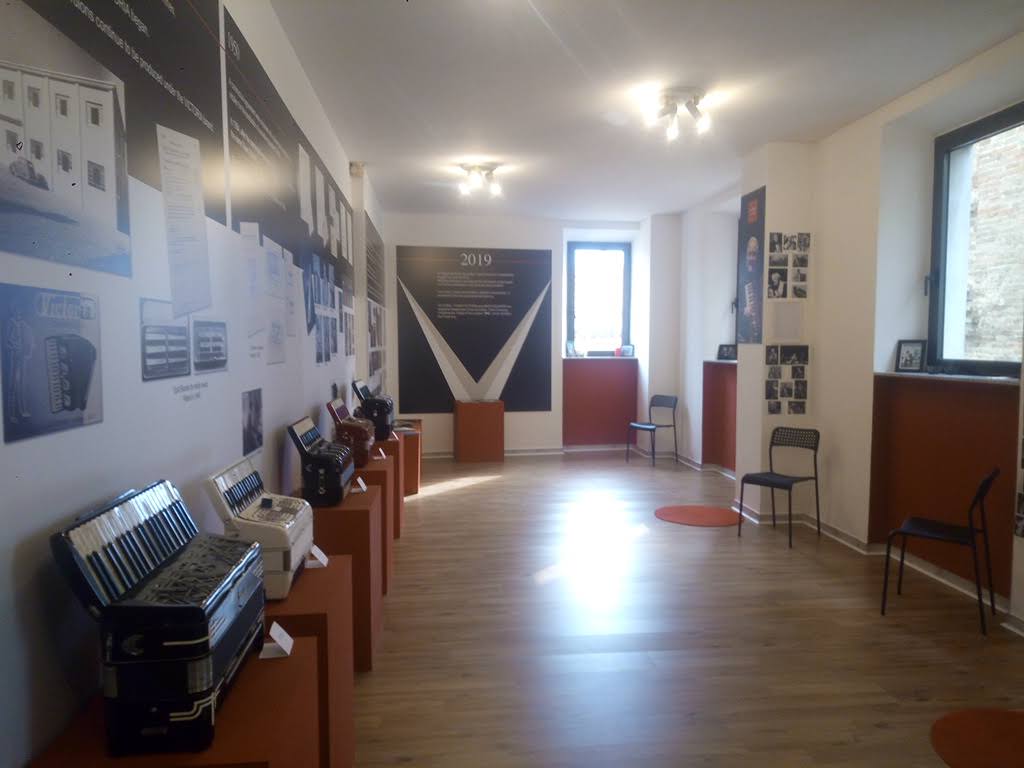 The history of Victoria Accordions

The Victoria Accordion was founded in 1919 by the Dari and Picchietti families in Castelfidardo bearing the same name as the founder families. Very soon the factory changed the name into “Victoria” because, as the legend goes, the inspiration came during a staying next to the Victoria Station in London (and also because the previous name Dari-Picchietti was much more difficult to pronounce). In 1984 the Victoria Accordion factory was sold to Vittorio Breccia (Elke is his daughter-in-law). 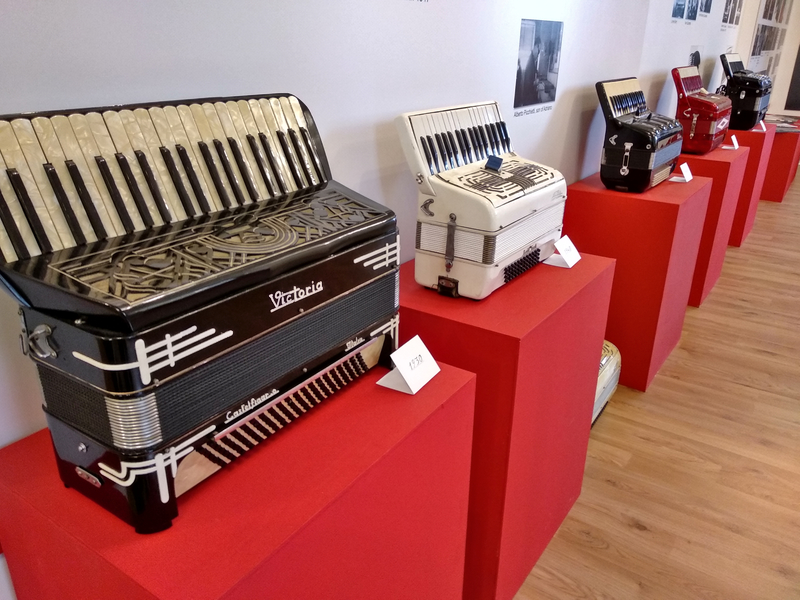 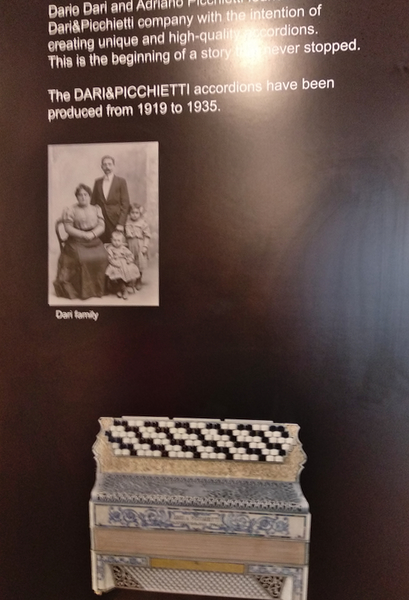 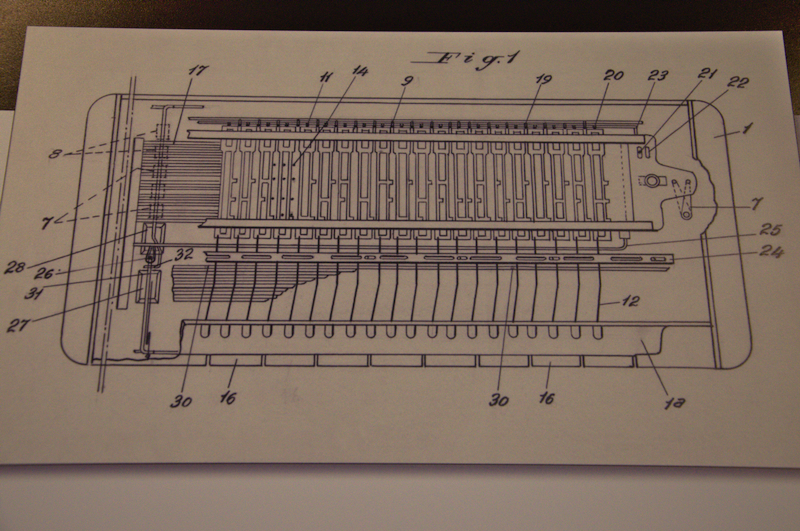 An Insight look into an accordion

The production of accordion immediately started off as one of the best not only in Castelfidardo, hence the cooperation with the greatest accordionists and teachers from all over the world. Do not be mislead by the word “production”, here nothing is related to “mass production”.

The accordion is more or less made of 1500 pieces, that have to be put together in order to create the velvet and unmistakable sound of this instruments. From 1999, the primary material is maple wood coming from Val di Fiemme, in northern Italy, where the wood for the Stradivari violin also comes from. Some pieces arrive to the Victoria accordion factory ready-to-be-used (the keys, for example), but some other have to created from scratch. In order to make an accordion, the artisans may work from 4 to 5 months, and one artisan is certainly not enough. Among other, in past times the women used to sew the leather, for example. 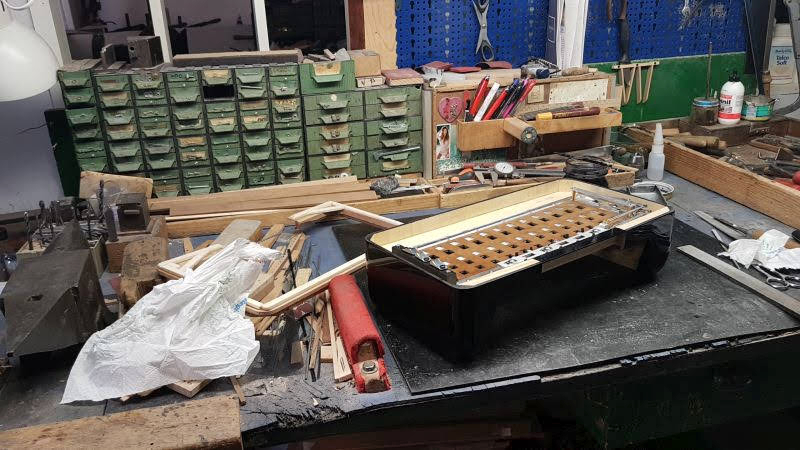 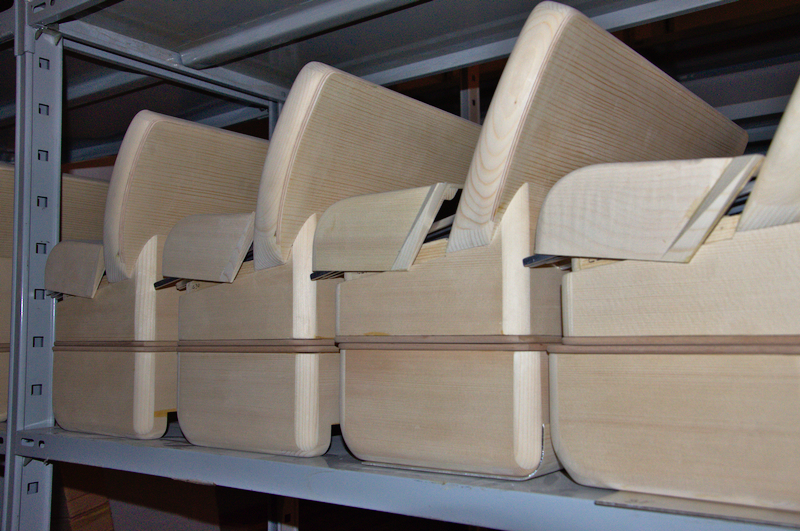 Currently,  there are 9 people working in the factory, and we had the chance to meet Franco, one of the most experienced artisan in Castelfidardo. Franco has been working for Victoria Accordion since 1963, and he is a bundle of knowledge and know-how (how the modern world would describe him). We were lucky enough to enter his workshop, and we were amazed by the tiny little work instruments and the dozens of parts that were ready to be assembled together.

Unlikely most of the artisanal activities all around Italy, the accordion production is not stopping with the most experienced artisans. The Victoria Accordion owner, Elke, has put much energy in involving the young generations from all over the world. 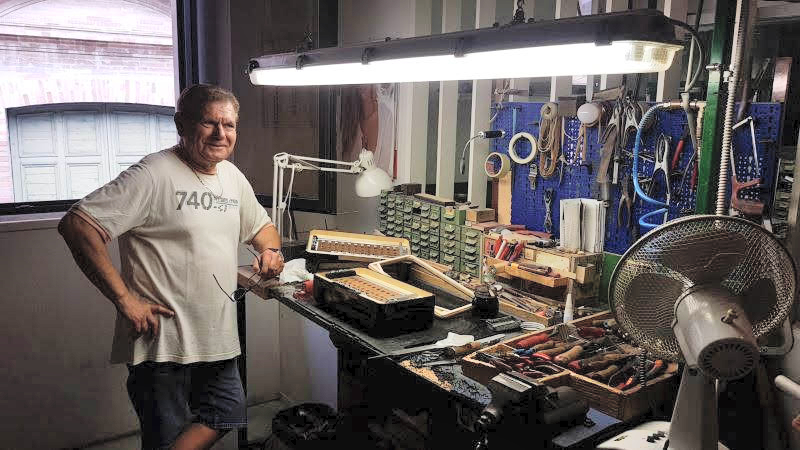 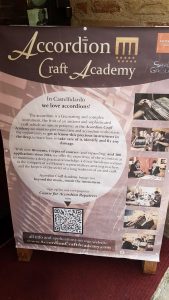 What’s more, the Victoria Accordion hosts a Craft Academy with max. 10 students per class, with more than 8/9 languages spoken! The students are not only professionals that would like to learn how to repair an accordion, but also hobbyists. The website of the Academy describes the mission as follows: “We want to give musicians and enthusiasts the opportunity to get to know this precious instrument in the deep, to learn how to take care of it, identify and fix any damage, and even build a brand new accordion from scratch. We offer the experience of accordion at its maximum: a deep, practical knowledge, a direct hands-on contact, in the company of well-known representatives, amazing teachers, and the keepers of the secret of a long tradition of art and craft.” 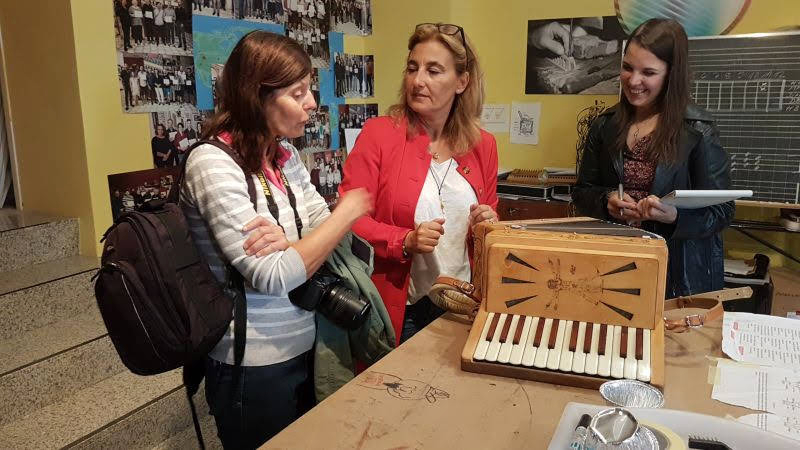 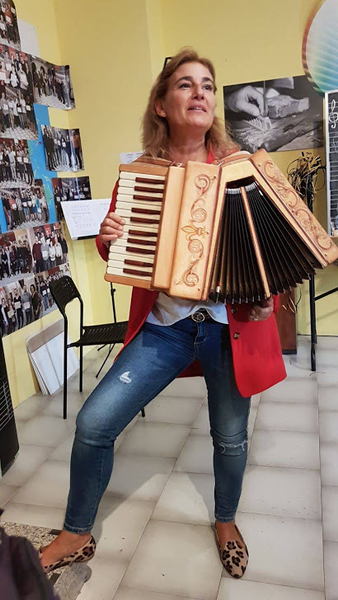 The instruments that can be studied and taught in the Accordion Craft Academy, unlikely its name, are not only accordions, but also Bandoneon and Concertina. Samples of these instruments can also be seen in the private collection that is hosted on the top floor of the Victoria Accordion showroom. 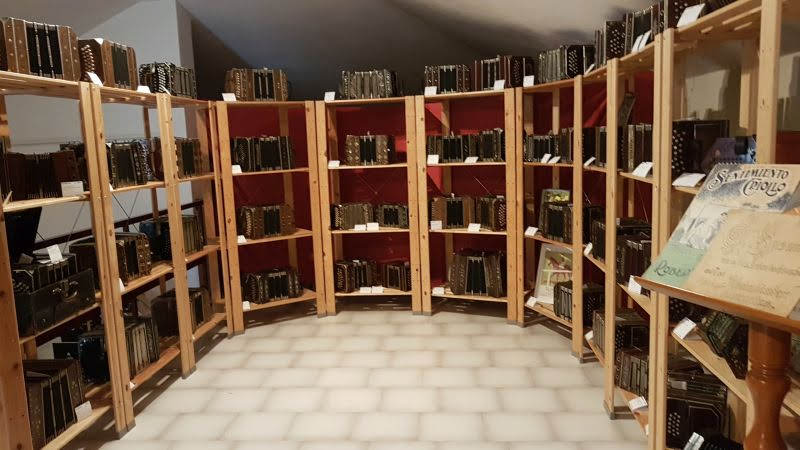 The collection is small but very rich. The eye is soon captured by an autographed photo of Astor Piazzolla, the famous Bandoneon player. We immediately asked our guide what was the reason for Piazzolla to be shown there, and she explained very surprisingly  that the Bandoneon was invented in Germany, and not Argentina, as the local belief tells. There were indeed Germans that migrated to Argentina, that brought the Bandoneon there and started to use it to accompany the famous tango, that later on became very famous because of Piazzolla himself. 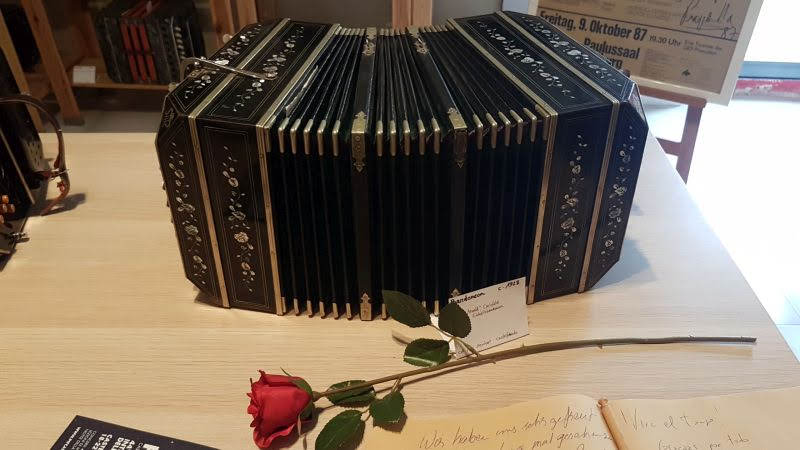 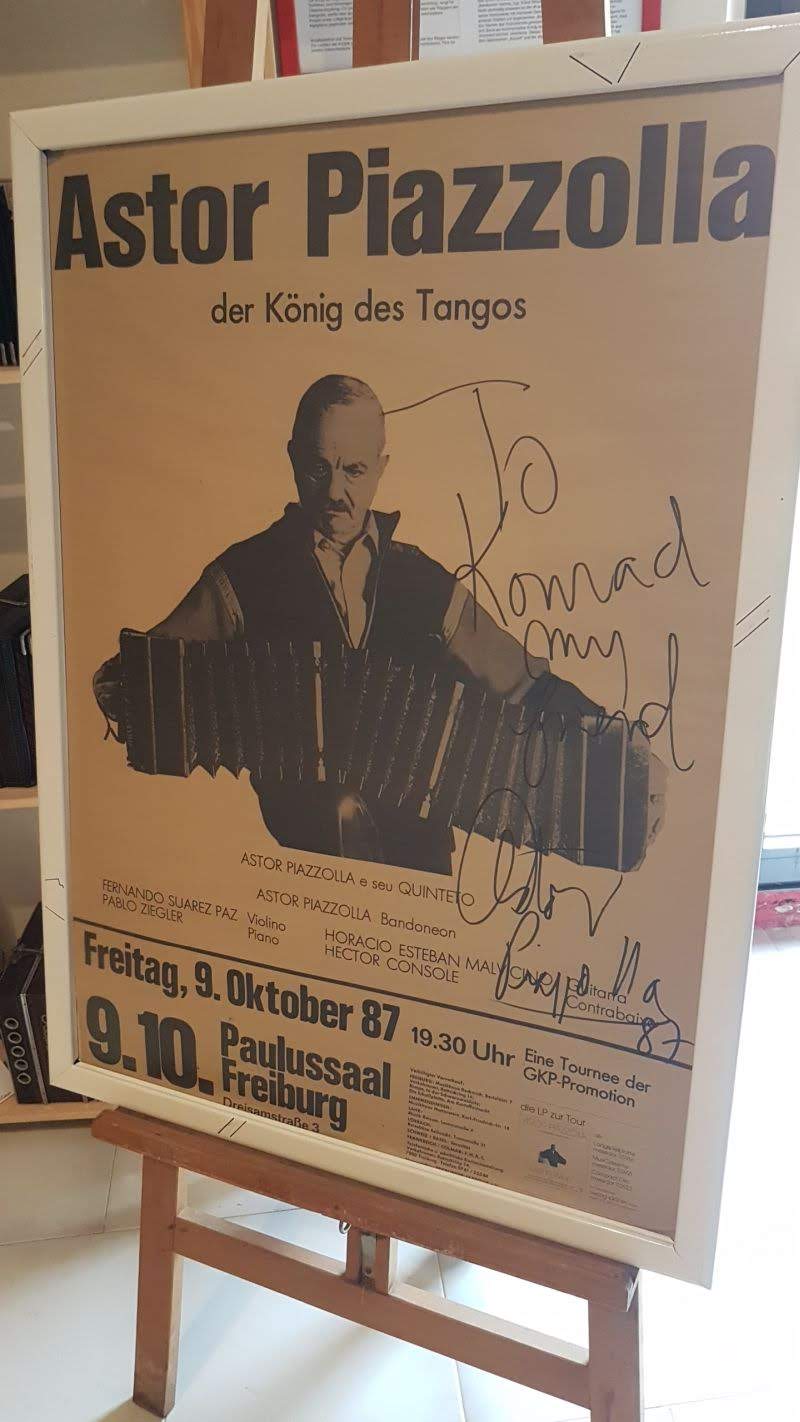 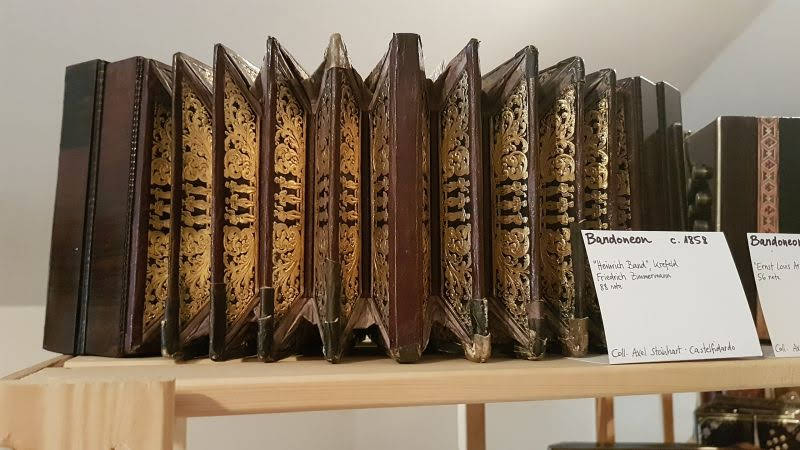 The collection is really worth a visit, as well as the “behind the scenes” of the Victoria Accordion’s factory. If you would like to visit Elke and her precious world, take a look at Marche Craft’s website and join a tour into the craftsmanship of Le Marche.