In Le Marche we have a very long tradition in the olive oil production, and you can feel it as soon as you drive along the hillside of our region. The fields are indeed full of olive trees, and if you happen to come between November and December, you will also spot some people either climbing or working on and around them. It is not an overestimation if we say that every family in the countryside owns small olive groves for small olive oil production!

Also, Isabelle and Elke own their olive trees, and you can see them at work in the pictures of this post! 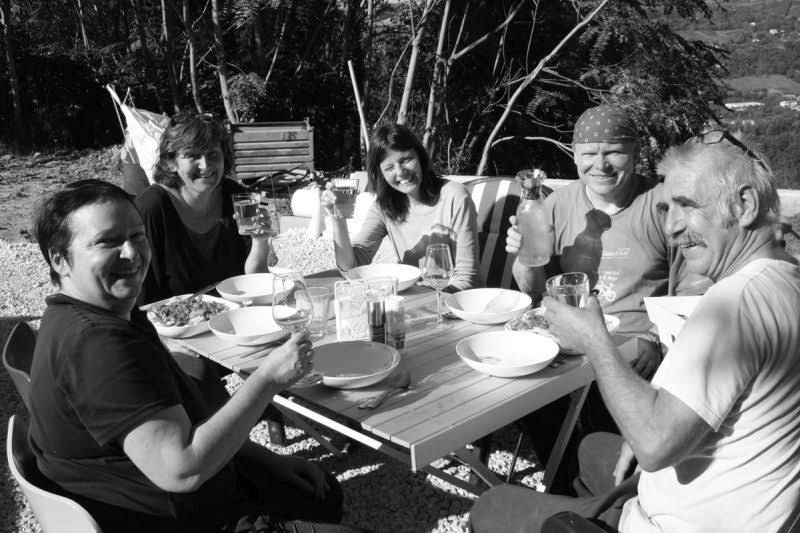 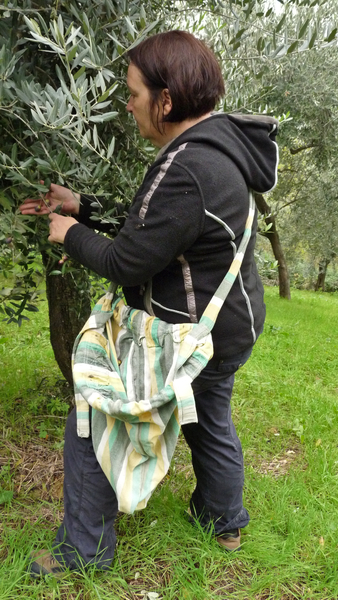 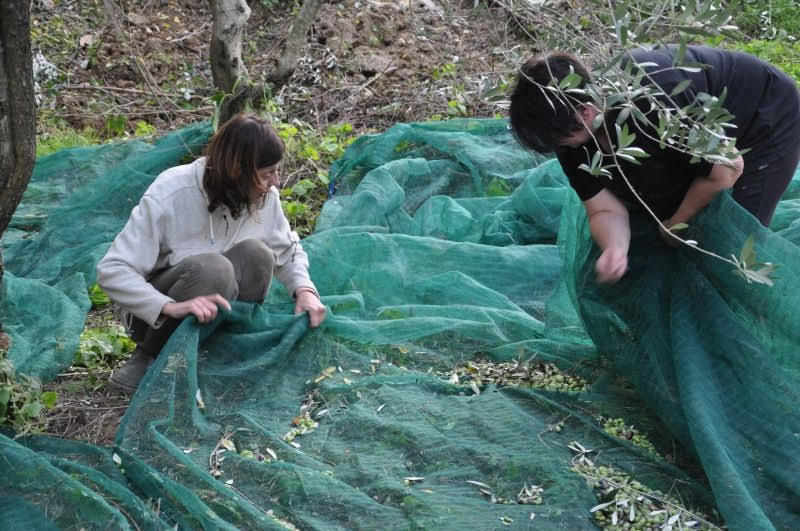 The first step to have a good extra virgin oil is to start harvesting the olives. We can either do it manually or use a motorized whorl. The former is surely more demanding, but the most fun. One person usually climbs on the tree to cut off high branches and harvest the rest reaps with hands or rakes, which are attached to long stems, while the rest of the “harvesting team” is ready to move the net under the trees and put the olives back to big boxes. 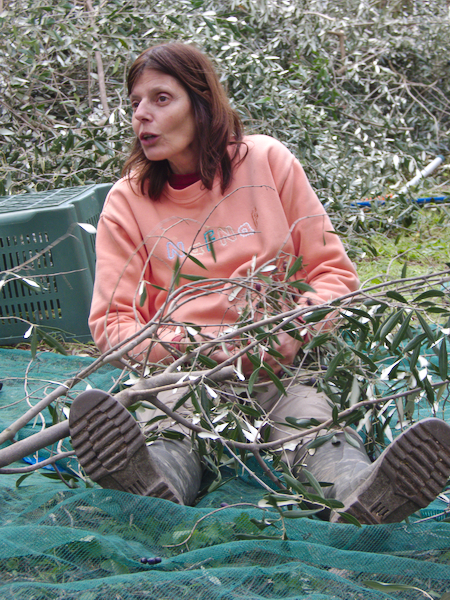 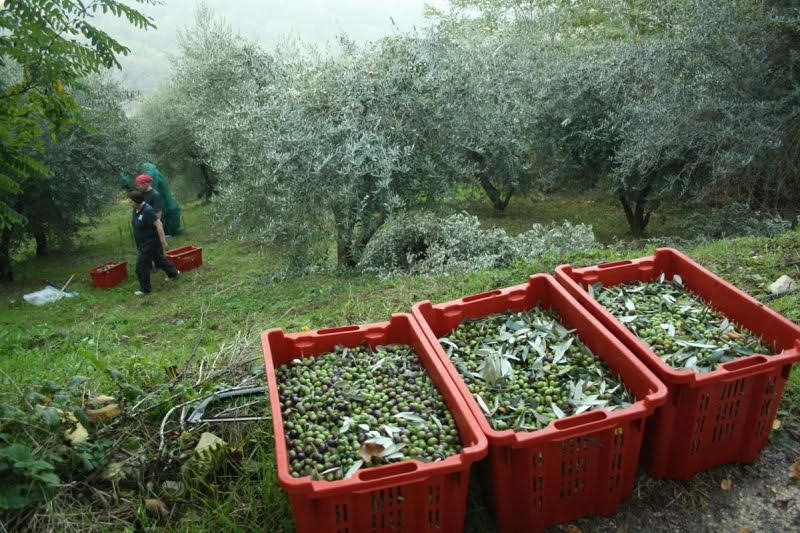 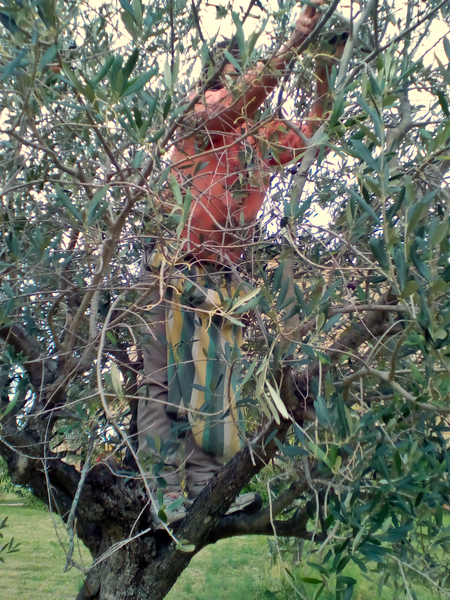 An important aspect of the quality of the oil is the freshness of the olives. The olives have to be brought to the mill within 2 to 3 days, and in the meantime the boxes have to stand somewhere cool and dry. The tip is also to leave some leaves in the boxes, that will cause some ventilation between the olives. Otherwise the olives start to produce mould and acid; not only the oil gets bad, but the olive mill may even reject the batch. 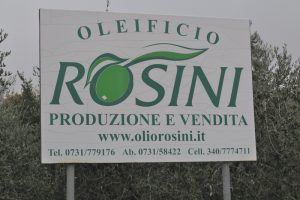 And now, off to the mill! Rosini Olive Mill is situated in San Paolo di Jesi, surrounded by vineyards and olive trees, of course. This mill is usually very busy during the harvest time, because many families bring their olives for pressing. In the process, the olives of the others are looked at rather sceptically: has he got better olives than mine?

An incomparable smell of fresh olive oil is in the air and it is a hell of a noise. Every now and then one of the two lines fails, and an employee has to be on the spot to fix the problem. Since it is so busy, the mill has a very tight schedule, and works also overnight.

The production at Rosini can be either traditional with large millstones and hydraulic press or with modern machines and centrifuge. Both methods can be used to produce cold-pressed and extra-virgin olive oil. The traditional production lasts 3 hours and requires 3 workers, with the modern method it is only 1.5 hours and 1 worker.

In principle, the olives in both methods are first freed from leaves by a blower and then cleaned in a water bath. Then they are crushed either with millstones or a crusher and the mass is constantly stirred for 50 – 80 minutes, so that it can dissolve the oil from the pulp. Afterwards, the liquid is pressed out of the mass – through a centrifuge or a press – and finally oil and water are separated. The magical moment is when the first own oil runs out of the press! 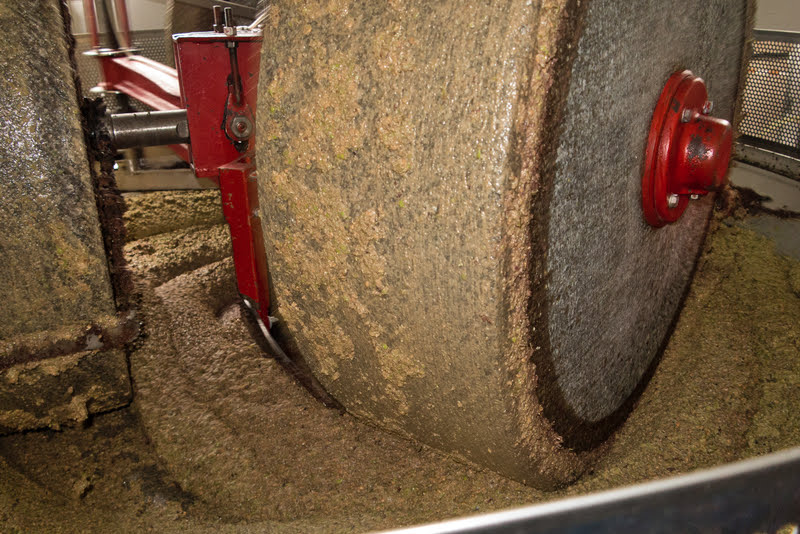 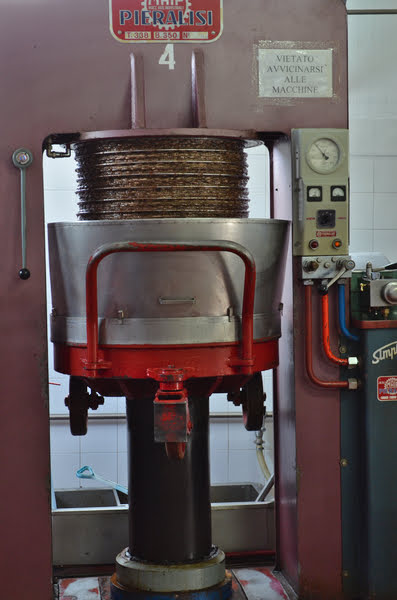 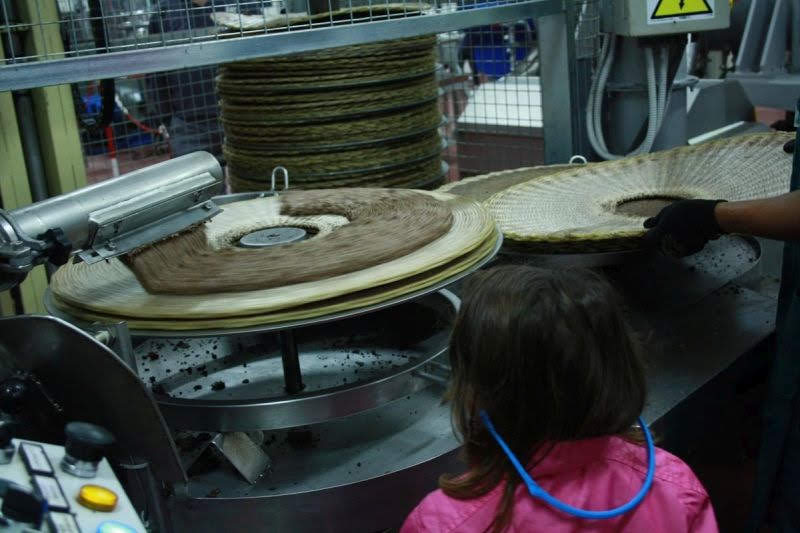 Isabelle has made a small video with Olio Rosini, where you can see the steps well:

And then it gets really exciting: what will be the “Resa” this year, that is, how much percent of oil comes out of the olives. In our area, the Resa usually varies between 8% and 19% – a very large scope, which depends on many factors such as weather, temperature and others. In general, less oil is obtained at an early harvest time, but the quality of the oil is usually higher because, with a longer ripening time, more and more acids form in the fruit, which can lower the quality of the oil. In order to have extra-virgin oil, the acidity must not exceed 0.8%. An acidity of 0.8 to 2% gives only virgin oil and over 2% is classified as “lamp oil”. 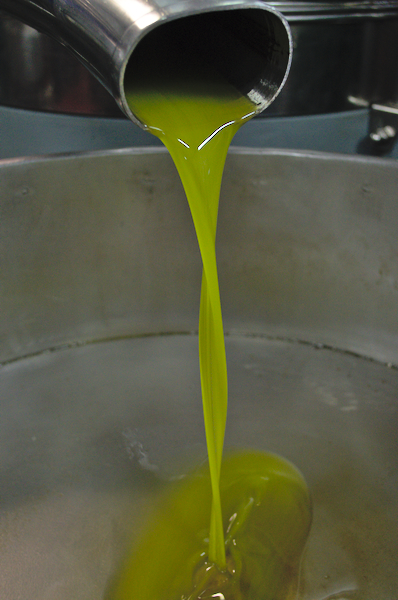 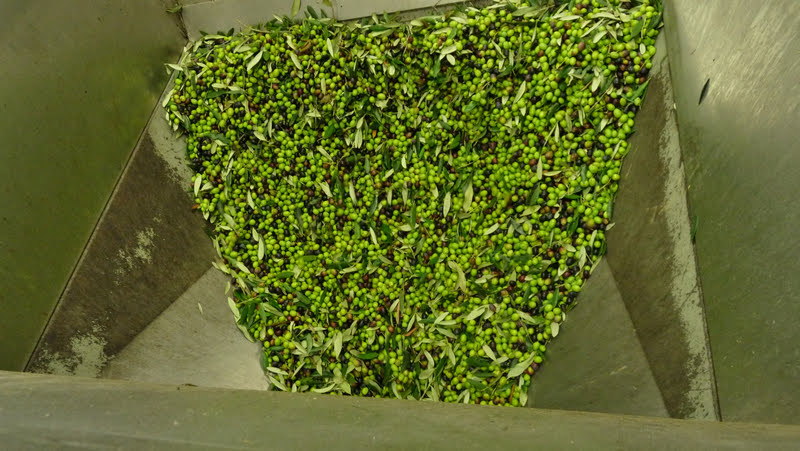 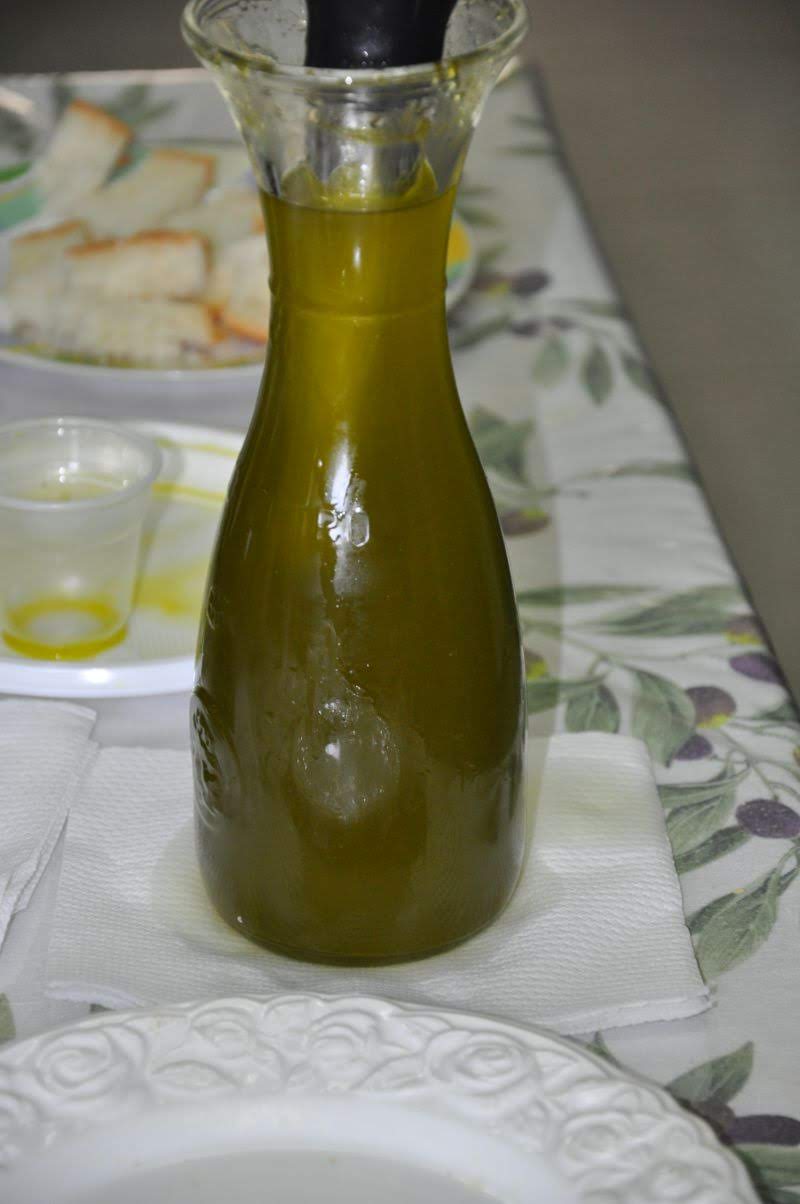 Unfortunately, the extra-virgin criterion can also be achieved by using chemical softeners in low-grade oil, and so it often happens that a good olive oil is often sold by the producer in the mill from 12-14 € per liter, while the supermarkets produce chemically treated oil for 4, or 6 € a liter. Oil at such a low price is always produced industrially – it cannot be a high quality, traditionally made one. 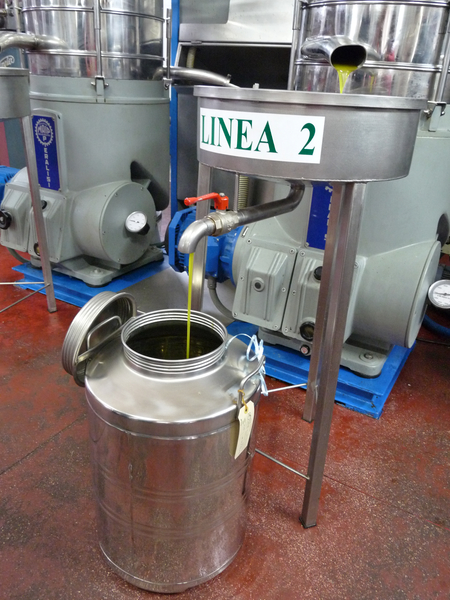 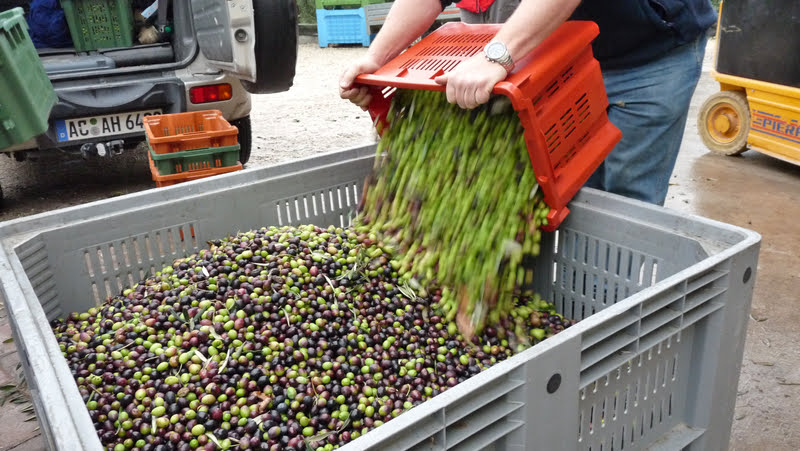 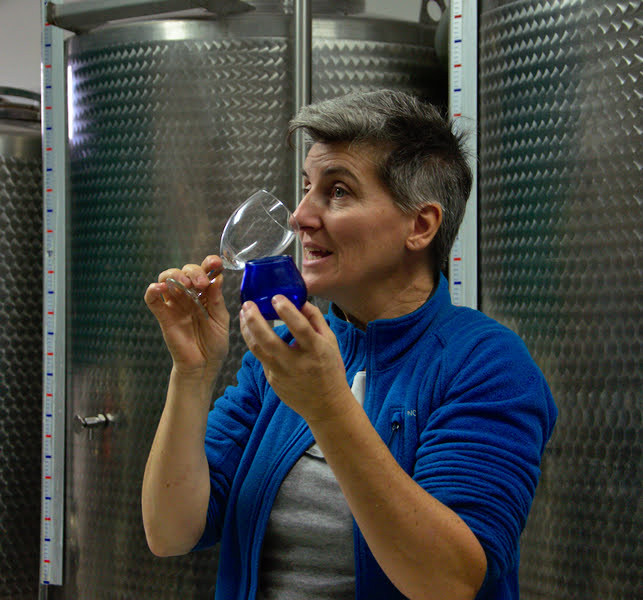 Nadja from the now family-run Olio Rosini has a passion for olive oil, which you can feel when you have taken a tour with her. She not only explains the manufacturing process in her mill, but she also gives you an ingredient, explains different olive varieties and makes an “olive oil tasting”, where you test different oils, just like professional tasters do. As a reward, after the tour, there is a table full of small, homemade dishes by her mother to show you what to do with your oil. This ranges from classic bruschette to ice cream with olive oil! 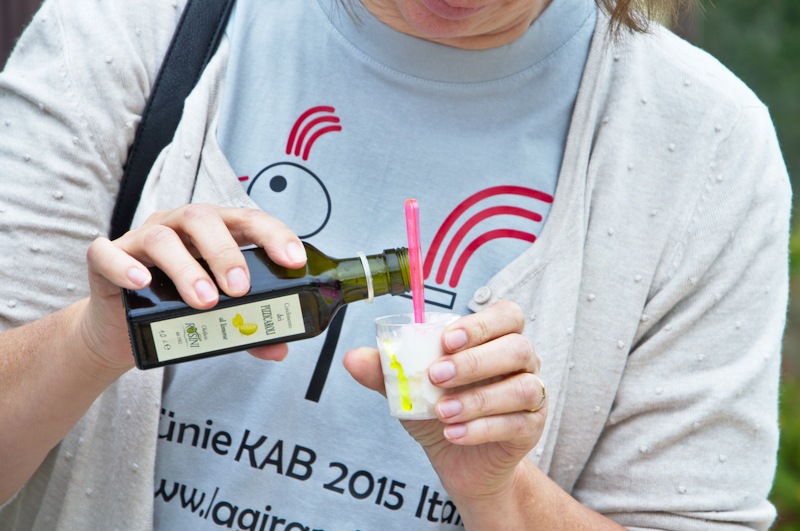 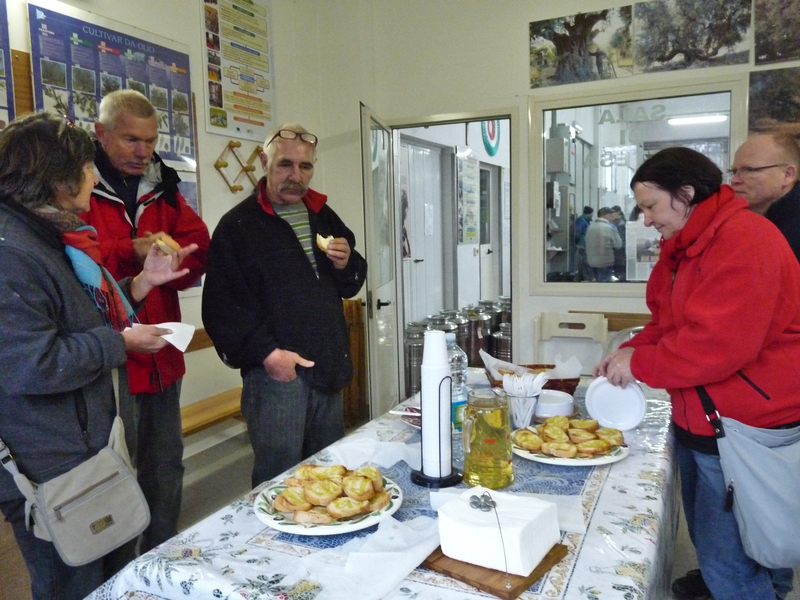 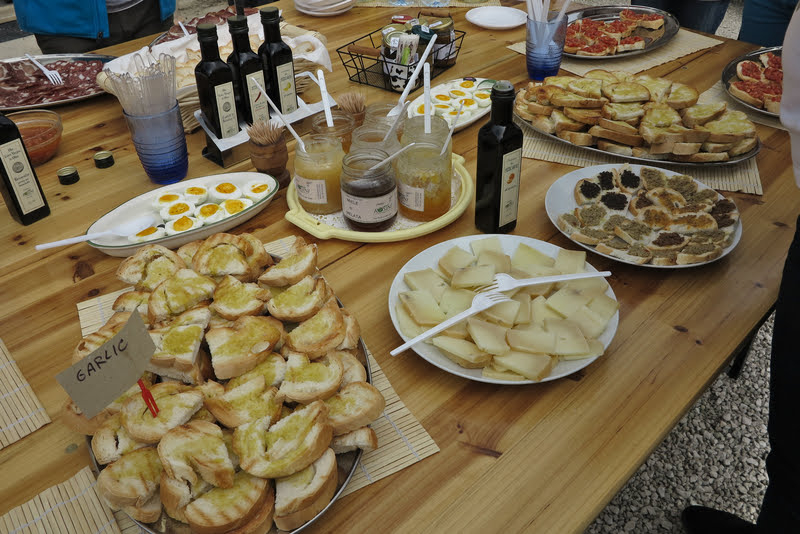 Visits to the Rosini Oil Mill are possible throughout the year, even if the mill is not in operation.