One of my resolutions for this year was to attend more theatre plays, concerts and ballets. Since we have more than 100 theatres in Le Marche, that wouldn’t be that difficult.

I must say that I am doing a great job with my resolution and, above all, I also find many occasions to join a guided tour to many historic theatres. Unfortunately, I was not able to attend the tour organized by the Pergolesi Theatre in Jesi; but my fellow bloggers Elke, her mother and Isabelle signed in as soon as they found out!

Downstairs in the foyer, the guide told about the history of the Pergolesi theatre: the actual theatre would replace the old wooden theatre Leone from 1728. In this occasion, 54 noblemen decided to jointly own several lodges in a new theatre; this solidarity between the nobles was so rare at that time that they came up with a new name for the theatre: Teatro della Concordia (understanding).
Two architects were involved in the construction: Francesco Maria Ciaraffoni and Francesco Cosimo Cassiano Morelli. The theatre opened during the Carnival of 1798, but without the presence of the nobles; after all, it was the French Napoleonic period when the nobility was not very welcome.

In 1883 the name of Concordia was changed to Pergolesi to pay tribute to the famous composer from Jesi, Giovanni Battista Pergolesi.

Another well-known Marchigian composer was also exhibited here in the foyer: Gaspare Spontini, born on November 14, 1774 in Maiolati, where he also died on January 24, 1851. He was especially esteemed at the French court of Napoleon and the King of Prussia Frederik. III.

The parterre is now filled with seats but originally, it was intended for the common people who followed the performance standing. As it is now with big concerts and plays in stadiums!
Pergolesi Theatre is a real joy to the eye: everywhere you turn, you can catch a beautiful glimpse of grandeur!

Slowly, different artists decorated the ceilings with paintings. Among them there was Felice Giani and Gaetano Bertolani that used scenes from the life of the Greek god Apollo (the one of the arts), the different facial expressions used on stage, and Giuseppe Valesi, who provided the beautiful decorations above the podium with a clockwork and time symbols.

In 1856 the siparium with an image of a fantasized Entry of Frederick II was created, by the creative hands of Luigi Mancini. Because this theatre cloth did not consist of fabric but of wooden panels that were always folded open and closed, it only partially survived the ravages of time. Nowadays only the upper part is visible, but the guided luckily had a picture of the original complete siparium.

Where once was the Ridotto room – a place where the spectators could retreat for a while since the plays used to last for hours, there is now a smaller room for lectures and a small Pergolesi museum. The museum is named after the composer Giovanni Battista Pergolesi, who was born in Jesi on January 4, 1710 and died at the age of 26 in Pozzuoli near Naples. His most famous works are Stabat Mater and the Serva Padrone.

On the upper floor, there are the austere changing rooms and the sewing workshop where they still make the costumes themselves. Although there is an exchange system with other Marchigian theatres, they still sew very beautiful garments here.

On the top floor there are the dressing rooms of the main actors, also very sober, but with a beautiful view of the piazza!

Now it is finally time to look behind the scenes! The technician explained that the lighting was sometimes still done analogically, which involved climbing very high. Computer controlled lighting is now also possible. Moving the canvas and the various screens up and down is still completely done with the help of muscle power and ropes.

The large attributes could reach the stage directly from the street through a hatch.

A nice feeling to be on stage, the wooden floor dated from 1980.

Here the guide told us about the superstitions of the actors:

To wish good luck before a play, the actors usually shout Merda Merda Merda (shit, shit, shit) 3 times. Before the start of a piece, this ritual brings good luck. After all, the former spectators arrived in carriages. The more carriages, the more spectators, but also the more horses and therefore the more shit.

The visitors that joined the guided tour were very lucky, because they could step on the floor and the curtain opened for a magical moment!

Categories: Culture
Tags: behind the scenesJesitheatre 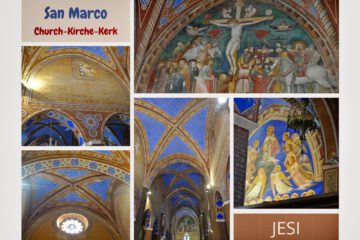