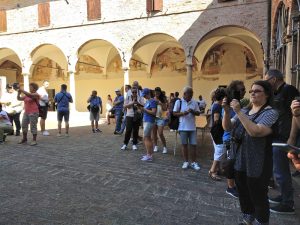 For several years the Destination Management Organization of Le Marche Region has been orginazing special photography days in villages, cities, and interesting (and, sometimes unique) places all around our region. They are the so-called “Photowalks”. The participants are divided into groups and accompanied by a local guide. The guide leads the photographers in a tour where the peculiar aspects, sometimes not even accessible by the public, of the area are highlighted. Participation is free on one condition: being active on social media and giving the permission to the region to take the photos as promoting material. You can also take part in a photo competition with your photos. 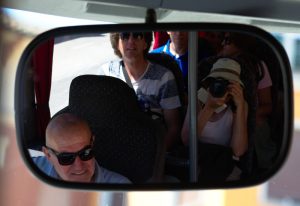 Eric and Isabelle on the photowalk

This year the municipality of Mondolfo Marotta kicked off the season. This municipality is a merger between a hillside village and a seaside one, resulting in a very rich offer. Registration was done in advance, but it was also possible to register on the same day. Unfortunately, I am currently in Norway and Elke was in Germany, therefore my fellow blogger Isabelle and his husband Erik took the change to join this beautiful day.

You know that there is no good day without some local food to kick it! Isabelle started indeed with a bag of the so 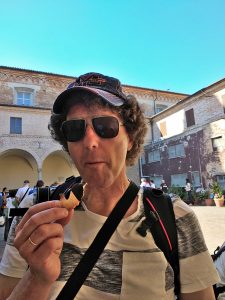 Being there a little bit early, they had the chance to have a look at the city museum, where the most important historical objects of the city are kept. There are, for example, a tombstone of the Piceni , an armor of a Gallic warrior and many agricultal tools. 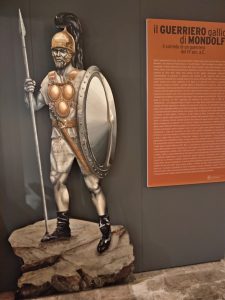 It seemed that the number of participants was so high that they had to be split into 4 groups, each one assigned to a local guide. Before the tour started, however, the local associations and authorities welcomed their guests with an introduction speech. These two municipalities are nationally touristy important: Mondolfo has been recognised as one of the “Borghi più belli d’Italia”, while Marotta has the Blue Flag, for its superb beach resorts.

The journey started in the studio / showroom of the all-round artist Filippo Sorcinelli. Just before entering, we heard music from Edith Piaf in the background, everywhere we saw perfume bottles, photos and antique objects in a dark setting. In the room there was a special scent that put a mystic light to the a row of headphones on the wall, and the liturgical clothing, chasubles and mites on the corner. Filippo was originally an organ player, that has now turned into a “sense” artist, meaning that he tries to involve as many senses as possible in his creations. He also designed liturgical clothing, including some for Pope Benedict XVI. He designed perfumes “combined with experience”, as he explains them. For example, he developed a perfume for il Pallone del Bracciale that smelled indeed of leather and metal. What what concerns the hearing, through the headphones you could hear an organ playing, while at the same time you were feeling a corresponding perfume. A very interesting way to connect senses. 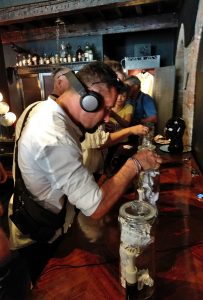 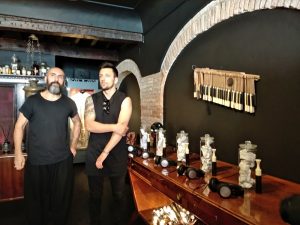 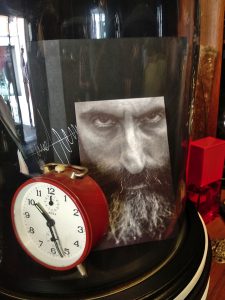 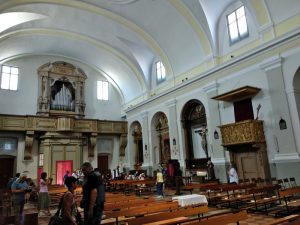 The next stop was at the Saint Augustine church, dating between the 16th  and 18th centuries. After the Church the main square is waiting for a lot of stories to tell. It indeed served as a spherium for the ball game called “Pallone del Bracciale”, with the city wall serving as a handball wall. A young man, a member of the Bracciale association, showed the must have for the game: a large wooden bracelet for the grown-ups and a lighter one for the children. After having explained the rules of the game, in which turned out that tennis was actually a derivative (the score of tennis is still like the Bracciale) it is time to move on. 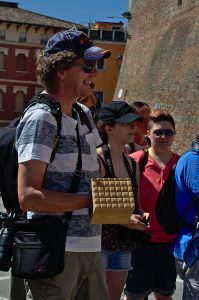 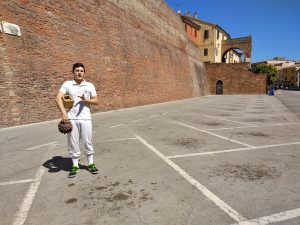 The guide walked through the city gate to the town hall with its large bell tower. The guides were really beautifully dressed, but with the medieval velvet costumes it must have not been very easy.. The Collegiate Church of Saint Giustina is nearby, but unfortunately the photowalkers were unable to enter it due to a wedding. 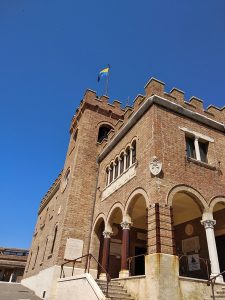 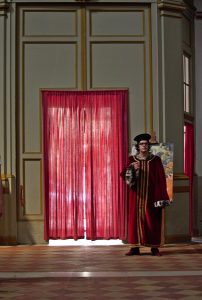 Along the oldest city walls they then reached the belvedere, from where the sea can be seen. Via the city gate Porta Nuova they again landed outside the city walls to view the armory. Here a knight in armor was waiting to explain more about the weapons on display. 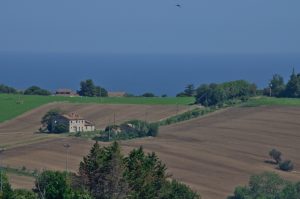 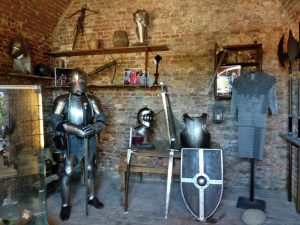 The walk continued to the Saint-Anna Bastion to be surprised by a beautiful courtyard with all kinds of rose bushes and a beautiful orangery. Once the inner garden of a monastery, now a place of silence for modern times. There were still guns lined up, because Mondolfo was not for nothing created in a strategic place: enemies can be seen from far away! 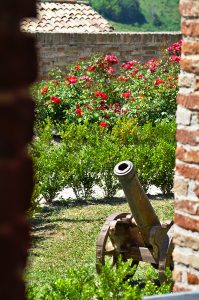 Mondolfo also turned out to be the city of the belle campane (clocks or towers). People regularly heard nice chimes. Moreover, the former post-carillon still played a melody every day at 11:00, 12:00 and 18:00. It used to be a sign that the mail had arrived. Similar to the signal that we now hear when a Whatsapp comes in.

After the hill village, they then moved to the seaside. In Marotta, where today there is the Vecchia Osteria, there used to be a stable in which travelers on their coaches could change their horses in the 16th century. Today it is turned into a lively seaside resort with a beautiful promenade, partly covered with mosaics. These beautiful examples of handicraft are made by employees of the association that is passionate about mosaic layers: they decorate part of the boulevard with their stones every year. 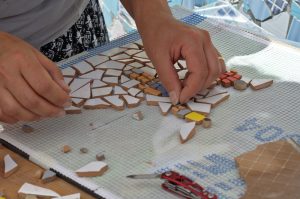 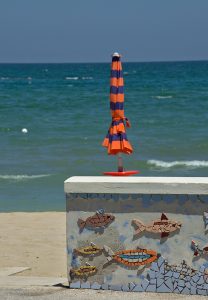 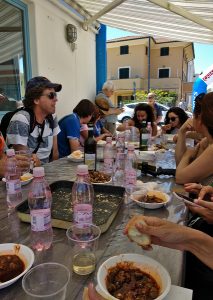 The gastronomic touch of the Photowalk could not be missed. On the beach, 3 old sea cubs were waiting for us to taste the garagoj or sea snails. They cracked part of the cochlea with a self-made tong before they ended up in the sauce (sugo). They did not betray the flavor of the sauce recipe, but they did keep a garlic and wild fennel flavour. There is still to learn how to eat them! When I am at home I usually eat them by slurping and sucking them, but you know, when you are in public you should behave, therefore you can find toothpicks 😉 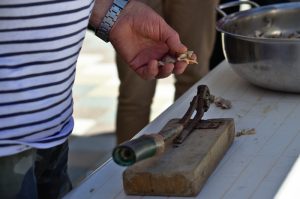 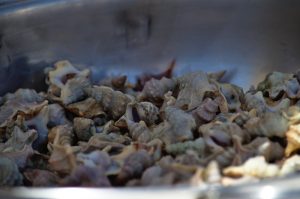 The photowalk is really a well-organized fun and educational day. You should not miss the next one, which is planned for July, 21st in Porto Recanati.

And if you would like to have more info about Mondolfo, have a look at their website!