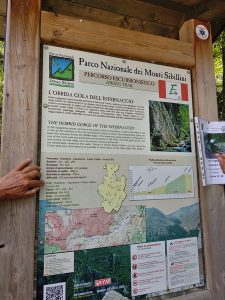 It won’t be the hot summer days to stop the hiking group of Cupramontana! What’s for sure, though, is that they will probably look for more shelter and cool places, than those sunny hot locations that they usually visit.

It is the case of their last hike to the Gola dell’Infernaccio (which in English would be translated into “Gorge of the bad hell”). Isabelle and Elke’s husband, Otto, also joined the hikers, and here is their thorough description.

Since there was no highway or expressway there, the cars of the group first snaked through Apiro, San Severino Marche, Tolentino, Sarnano, Amandola and finally Montefortino, where the Gola dell’Infernaccio was signposted. Isabelle, who drove the minibus, followed the signs for the Rubbiano district and drove to the parking lot at the beginning of the gorge.

The tour group was already in a good mood and accompanied with many “Ah” and “Oh” as the beauties of the landscape along the way were starting to appear. 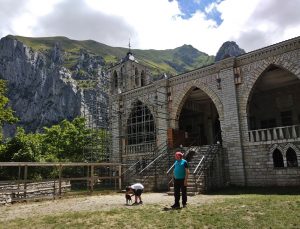 The first destination was the Church of San Leonardo, which was built by Father Padre Pietro himself and in which he lived as a hermit for more than 40 years.

The trail is also suitable for less experienced hikers and meanders along the gorge, past various smaller waterfalls and water cascades (called Pisciarelle). And even though it was high summer there was still water in the cascades. At one point the group had to cross even smaller waterfalls – in this weather it was a welcome dip. 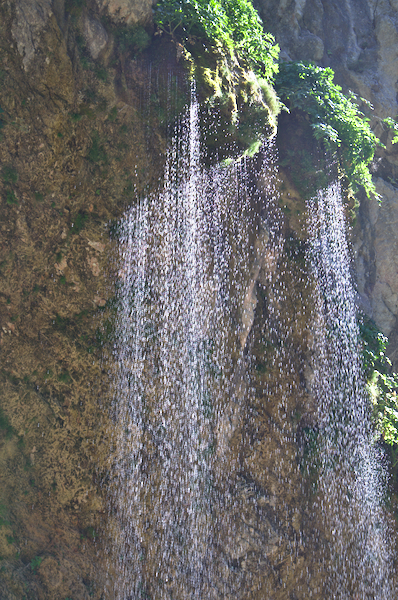 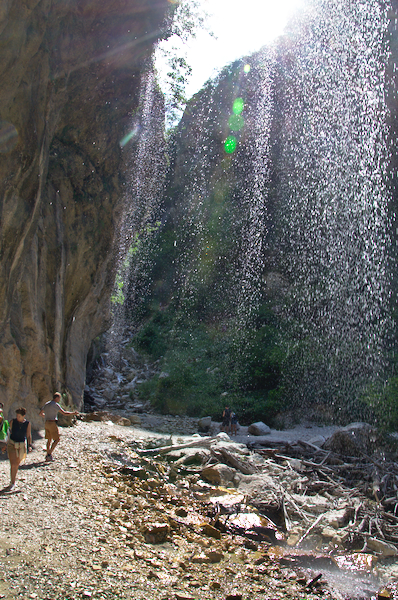 The path continued through a pleasantly cool, shady beech forest. 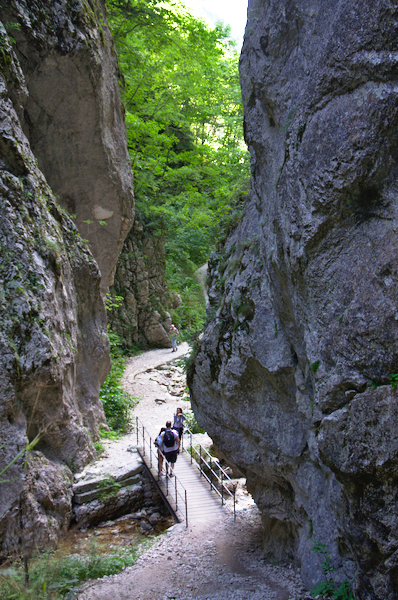 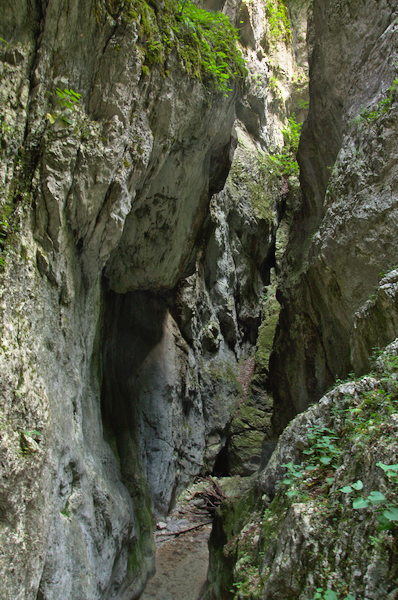 Arrived at a crossroads, the path led to the right to the monastery of San Leonardo. It is amazing, because the church is not a simple construction, although it was built by Padre Pietro at that time alone. There are ornaments and arches and the church is also handsomely tall. The priest must have dragged the stones from far away. Unfortunately, he died in 2015 at the blessed age of 88 years. Some members of the walking group were able to remember him well from previous hikes. The church is now open to visitors and you can even see a small movie showing the Padre. There are photos of him all over the church. 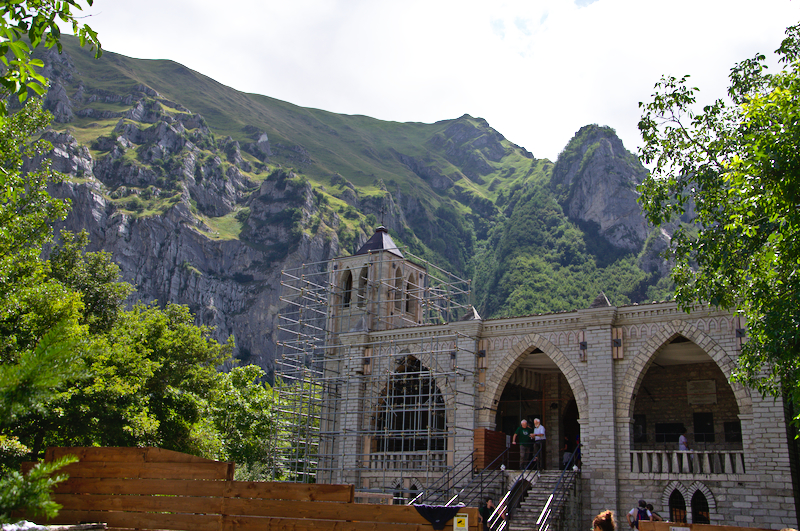 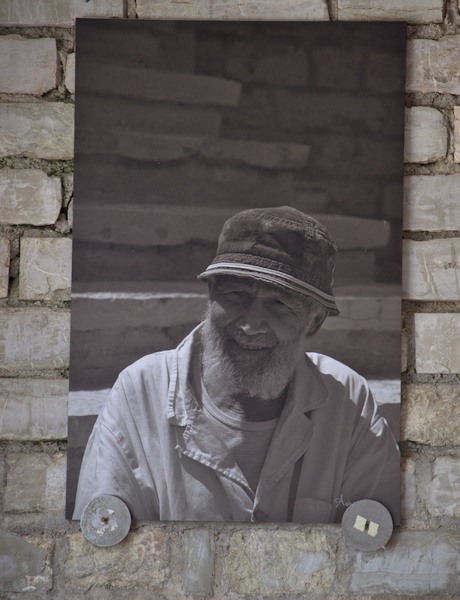 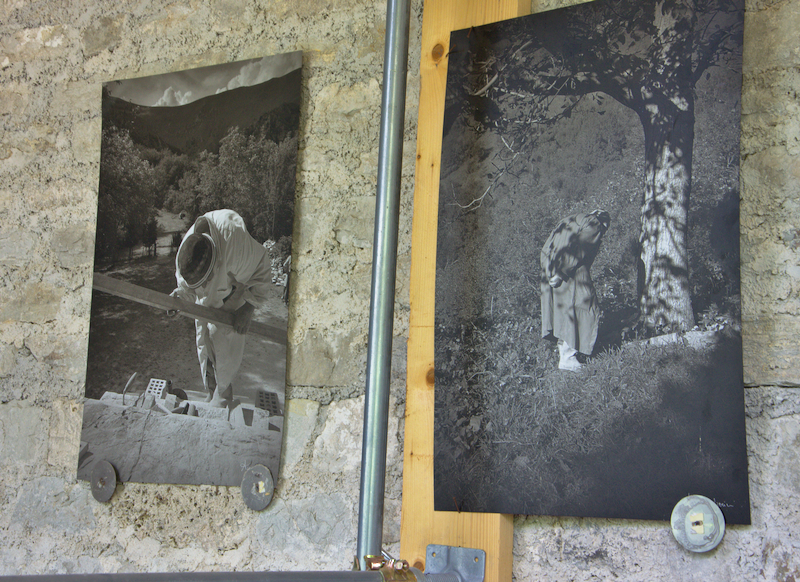 They talked to a pastor living in a nursing home in the area. He recommended that the group, once there, also go the way to the waterfall, which was very close by. Strengthened by the picnic and good things, the group opted for it. However, this track turned out to be more demanding: who had hiking boots and no fear of heights, now clearly had the advantage! Partly the climbs had to be laboriously climbed with the help of roots and branches.

As soon as the waterfall came into view, they also saw a path down from where you could probably see the waterfall even better. But the whole route became more and more adventurous and dangerous. Since some of them had no hiking boots and since they already had a view of the waterfall, the group decided to turn around and go back. 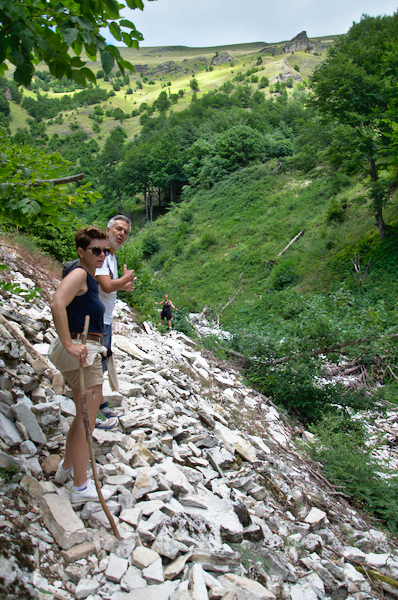 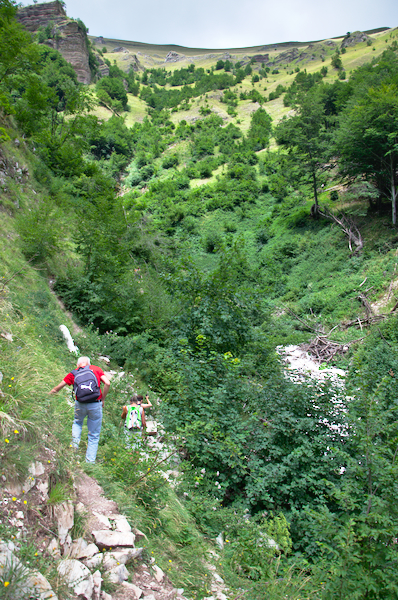 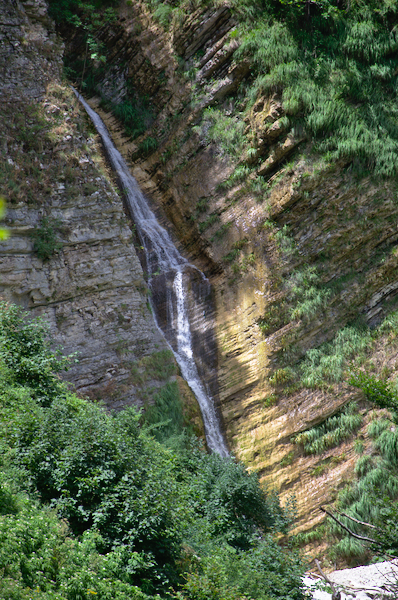 Back to the intersection, where they took a short detour to the source of the Tenna River. After another 2 hours, they finally saw the artificial lake formed by this source after the 2016 earthquake. As a reward for the effort, crystal clear water offered refreshment to those who ventured into the ice-cold water. 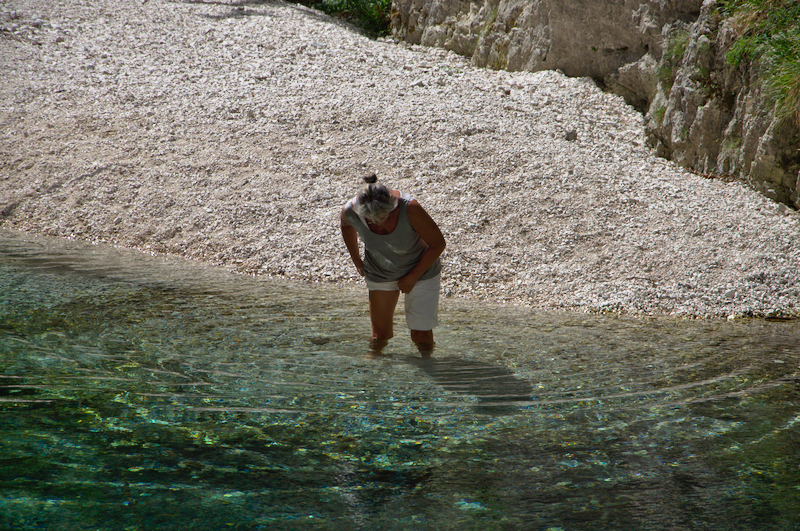 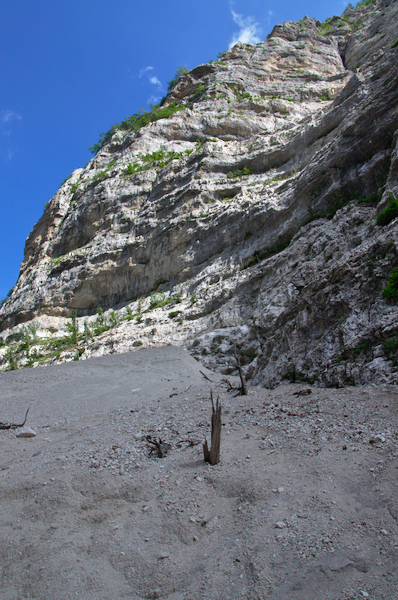 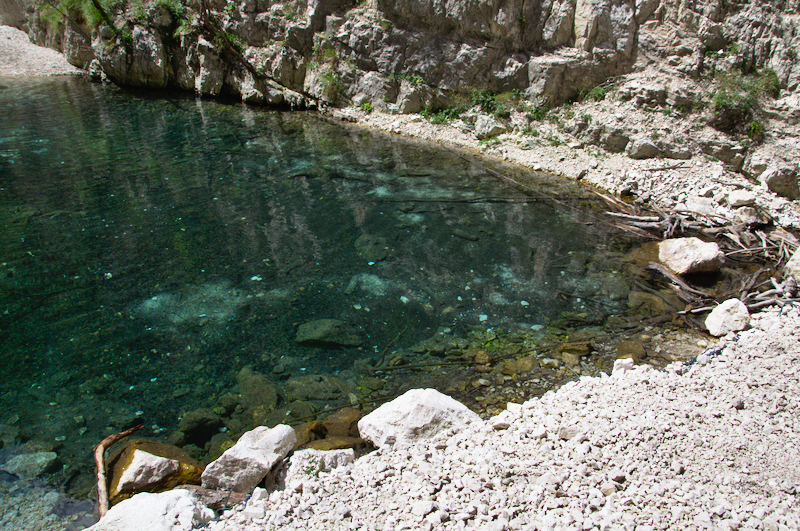 Refreshed and satisfied, everyone got into the cars and heads for the return journey. What a spectacular hike! And up to the waterfall, it is also suitable for inexperienced hikers or children. In summer, weekends are often busier, but those who come during the week or out of season can experience this natural spectacle in secluded tranquillity and recollect why Padre Pietro chose this place for his secluded hermitage. 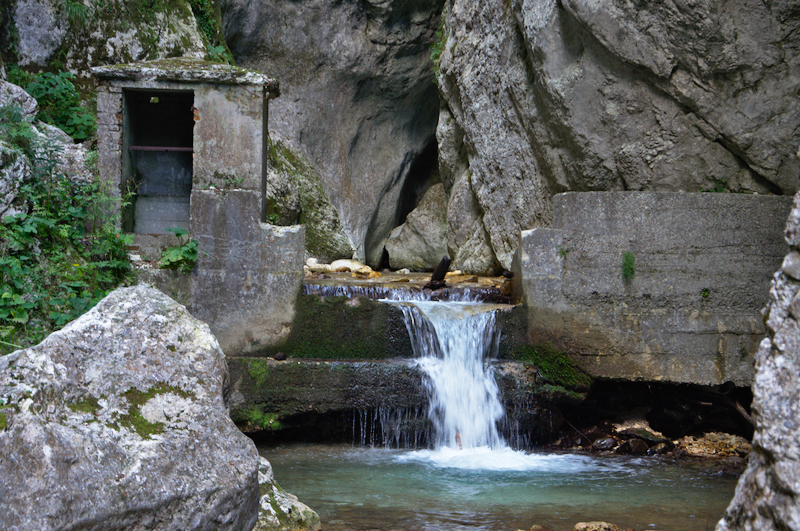 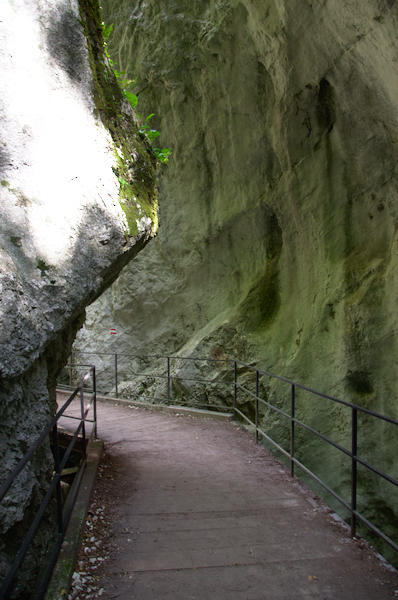 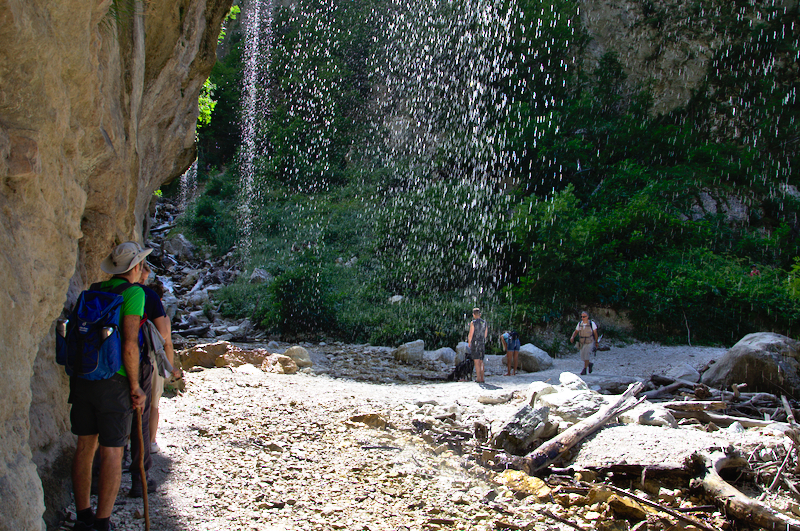 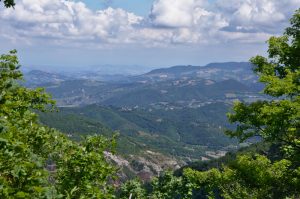 f you would like to hike there, here to the left to hiking pages with descriptions and GPS track (track not tried!).

Ecco Le MarcheOn a chill spring afternoon, my friend Diletta and I decided, very randomly, to go for a hike. We parked just outside the small village of Albacina, along the road that leads to Read more…