Lectures, readings and film screenings are held in memory of the many victims of the genocide of the Jews.
With his Stolperstein art campaign, the artist Gunter Demnig has found a beautiful way to permanently commemorate the people who were murdered, deported or expelled under National Socialism, including millions of Jews.

On December 16, 1992, exactly 50 years after Heinrich Himmler had ordered the deportation of 1000 Roma and Sinti, he laid a brass-plated stone with the first few lines of this order in front of Cologne City Hall.
Three years later he laid the first Stolperstein (stumbling blocks) in Cologne, but without official approval. In front of each victim’s last residence, he placed a square stone with a brass plate engraved with their name, dates of birth and death, and places of deportation and death. Passers-by should symbolically “stumble” over the memorial plaques and be reminded of the atrocities of the Holocaust and other victims of National Socialist persecution throughout the city.

In 2000, the German state gave official approval for the laying of the Stolpersteine. There are now over 75,000 of these stumbling blocks across Europe.
In Le Marche you can already find some of these Pietre d’inciampo, as they are called in Italy.

In Ostra Vetere you can almost literally stumble over the memorial stone, because the brass plate stands out clearly from the surrounding cobblestones.

Even if Demnig now has a few helpers who help him with the production and laying, he still travels to the commemoration ceremonies year after year and kneels to set the respective Stolpersteine in the ground.
The stone in Ostra Vetere was personally made and laid by Demnig in 2017. The victim, Gaddo Morpurgo, was executed with other prisoners near Forlì military airport. The discovery of his father’s diary and subsequent research led to this stone.

Here is a list of all the stumbling blocks in Le Marche, found for example in Ancona, Jesi, Osimo and Ostra Vetere.

In Jesi, Isabelle had difficulties finding the stumbling block there because no house number was given. But if you want to look for it, the memorial stone is on the walkway just across from the mural dedicated to current national soccer team coach Mancini, who is said to have grown up in the neighborhood. The laying of the stone here took place on January 27, 2020. The victim, Giulio Ottolenghi, had been murdered in the Auschwitz concentration camp.

The topic is very important to Elke personally, as the Stolpersteine restore visibility and memories for the people who were supposed to be destroyed and wiped out under National Socialism. Here’s Elke’s story: “With my brother and my mother, I also donated four Stolpersteine in Aachen / Germany in 2020, which were laid in memory of the Weinhausen family, whose daughter Ruth was a playmate of my mother. In researching the fate of this family, we learned a lot about the persecution of the Jews in our hometown, of which the murder was only the very last and most cruel act.” 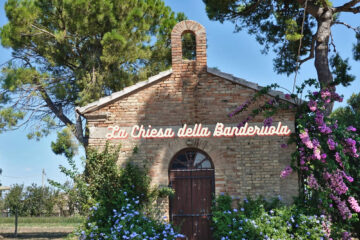 An unknown stopover for the Holy House of Mary in Loreto

Ecco Le MarcheIn Le Marche, the night between December 9 to 10 proves to be very important: we commemorate the fact that the angels flew the house of Mary from Palestine to Loreto. Bonfires are Read more…