Senigallia is one of our favorite beach towns in the Marche. The seaside resort, which is extremely popular with Italians, offers the famous velvet beach, many good restaurants and a charming and lively old town.

Outside of the main holiday month of August, when it is murderously crowded here, Senigallia is always worth a visit: we were there on a beautiful day at the beginning of November and took a long walk through the town.

Of course we started with a delicious lunch at my favorite restaurant Luna Rossa overlooking the sea!

Well strengthened we drove to the Rotonda al Mare and parked our car opposite. In November you will also find sufficient parking spaces directly on the beach promenade, which are even free of charge in the low season.

The Rotonda al Mare, a platform built into the sea that reminds me of classic British seaside resorts like Brighton, is Senigallia’s landmark. When you read what the building has been through, you can understand why the Senigallese are so proud of it: originally built at the beginning of the 20th century, in the Belle Epoque, as a wooden structure on stilts in the sea, around, as we would say today , to house a wellness center, it was completely destroyed only a short time later during the First World War. In 1932 a new, larger Rotonda was built a little further north in Art Nouveau (Liberty style), which, however, suffered a lot of damage during World War II. In 1948 it was repaired and given its present form. In 1972 severe storms and waves damaged the building. In 1987, after another expensive renovation, it served as a nightclub and dance hall for a while until it was badly damaged again in a devastating fire in 1992. It was not restored again until 2006 and since then it has been a venue for all kinds of exhibitions and concerts in the summer, but is also often booked for wedding celebrations.

From here, the leisurely hike first went in the direction of the city center, past the Renaissance fortress Rocca Roveresca from the 15th century, named after its builder and ruler of Senigallia, Giovanni della Rovere. The mighty, rectangular castle with 4 towers can be reached via a long bridge and today houses a museum on the history of this building.

Our way continued through the old town, which was now completely empty right after noon, but usually fills up after 5 p.m. with people strolling along the many small shops or enjoying an aperitif in one of the bars.

In addition to the nice little alleys, the old town offers:

The 19th-century Forum Annonario, on whose square a small but fine fruit and vegetable market takes place in the mornings and in whose colonnades there are some quaint pubs and delicatessens. Almost every year, when the historic Mille Miglia car tour passes through Senigallia, you can admire magnificent old racing cars and their proud owners.

The Piazza Garibaldi, where clothes, bags and other textiles are sold at the traditional Thursday market, is also known as the Piazza del Duomo. Because here is the cathedral dedicated to Pope Pius IX, who came from Senigallia. In the mid-19th century, however, this pope was characterized above all by cruelty and intolerance: death penalties in the Vatican, the establishment of a Jewish ghetto in Rome and the banning of the Talmund on the list of banned books are just a few examples. In addition to the cathedral, the large Piazza Garibaldi also houses various beautiful palazzi.

The 17th-century Portici Ercolani stand on the south side of the long Misa River promenade on the outskirts of the old town.

Continue to the north side of the Misa River

Through some residential streets we get back to the beach, which we follow south to get back to our starting point.

In between is the fishing and sports port. Countless fishing boats encourage me that the freshest fish is served in the restaurants here. If you want, you can make a detour to the end of the pier, where Penelope, the mermaid, makes sure that the fishermen get back to the harbor safely, we reported in an earlier post.

In the meantime it has gotten dark and we return to the starting point at the Rotonda, which can still be seen in the evening!

If you want to follow the walk, you are welcome to call up the track with a description from Komoot or download it from our Google Drive. The tour was 6.9 km long, but absolutely flat and easy to do even for pleasure hikers with arthrosis like me!

Note on the flood disaster

One more comment on the catastrophic floods that hit Senigallia and several other places in Marche in September: the Misa River also burst its banks and mudslides rolled through the quays up to the Foro Annonario. Shops, bars and homes were flooded. Tree trunks piled up in front of the bridges and damaged them, which is why we had to make a few unplanned detours on our walk. But as you can see from our photos, the streets and squares have already been cleaned up, most bars have reopened (the beach bars were unaffected by the flooding), the famous Thursday market is open again and in some houses you can see busy hands Renovate and clean up. Senigallia is looking forward to visitors again!

I heard somewhere that the brilliant “una rotonda sul mare” by Fred Bongusto is written about the Rotonda at Senigalia.

Hello Daniel, thanks for your information ! Apparently that’s what the singer said to the journalists when they asked him which Rotonda was meant. But some years later, the songwriter Franco Migliacci pretended that the Rotonda was in Passignano at the Trasimeno Lake in Umbria. 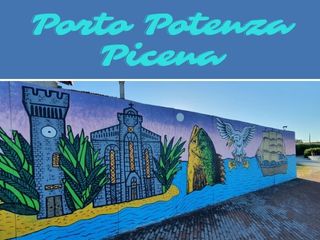 Ecco Le MarcheWhen it comes to beaches we can’t complain in Le Marche; we have indeed 170 km of coast! From north to south there are sand, pebble and rocky beaches. Just to brag a Read more…