The stunning streetart in Cacciano

It was about time that street art started to be considered as unique as other forms of art (should we thank Banksy for this worldwide popularity?). In Le Marche we also find murals, or Murales as they call them here. We already visited Braccano near Matelica, but this time we will take you to the village of Cacciano where they started for the first time 11 years ago.

Until the 13th century Cacciano belonged to the county of Nocera (Umbria) and in 1214 it was moved under the rule of Fabriano. Probably it was of Longobard origin, but perhaps even Roman as the name refers to Catius, a rather common name among the Roman nobles. After all, Cacciano had a strategic significance on the road to Umbria.

This hamlet is located southwest of Fabriano and it is now part of it. Via a beautiful road through the mountains we pass the sign Murales of Cacciano to finally arrive in the village, where the silence really dominates. The road ends here, you don’t get any further than Cacciano. Parking is done along the road, we see a bar of the local circolo (village association) that they are currently refurbishing. The first murals are already waiting for us.

They are real works of art, they look like pictures projected on the walls of the houses.

Some of the murals are painted on the walls while others are realized with spray paint. We can’t believe our eyes.

2 older men ask us how we like it, we answer “beautiful”. You are lucky, one of the artists has just started working. That is a nice coincidence!

It turns out to be the artist Federico Zenobi from Jesi, well known in the world of Street art: his paintings can be found all over the world.

For several years now he has been coming to Cacciano to the invitation of the local association Fenalc to make 2 works of art each time. In a garage we see the many materials he needs. He is currently working on a copy of a painting.

I can’t believe that you can realize such a small drawing on such a large surface. We indeed encountered his stage name KOR1 in several places. In the video you can see how it works.

The residents we find all greet us kindly and welcome the interest. One mural is particularly striking, that of a life-size old woman portrayed, it is the 90-year-old “zia Itali” that we also met. Seeing her portrait on the wall, she would have said to the artist in amazement: “But I am small and you made me so big? ” Unfortunately, she had no time to be in the picture because she urgently had to go to her vegetable garden to water the vegetables. She walked briskly to the edge of the village where the vegetable gardens were.

We also went that way, to view the latest murals and to have a nice view of the beautiful village of Cacciano.

We said goodbye to the artist and the 2 men who spent the summer here, because their roots were here after all. The rest of the year they lived in Rome, where there was more to do, but too hot in the summers.

Are you around Fabriano? Then drive to Cacciano where the paintings all harmonize with nature; plants, animals, agricultural life … the houses tell the local history. The village’s location alone makes it worth the drive. 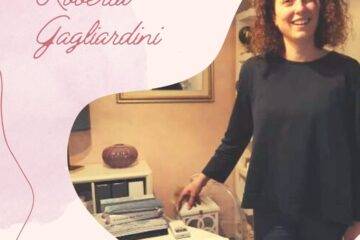