An unknown stopover for the Holy House of Mary in Loreto

In Le Marche, the night between December 9 to 10 proves to be very important: we commemorate the fact that the angels flew the house of Mary from Palestine to Loreto. Bonfires are lit everywhere, as we reported earlier in one of our first posts.

However, those who studied this legend better, say that the house of Mary landed in different places before finally arriving in Loreto. According to the tradition, the journey of the house started on 12/5/1291 with Rauniza in Dalmatia, the current Trsat (part of Fiume) in Croatia, as the first stopover. 3 and a half years later, the angels reappeared on the scene, to transfer the cottage to a laurel forest on the Adriatic coast, on 10/12/1294.

The cottage quickly attracted pilgrims, but also robbers and other criminals. Not the ideal place, according to the angels, to fly over to a hill, owned by the noble brothers Stefano and Simone Rainaldi de Antiquis from Recanati. This again attracted pilgrims, but the greed and the quarrels between the two brothers grew day by day, so that the house moved again, but now definitively to the place where it still stands after all these centuries.

However, to commemorate the stopover on the property of the brothers, a small church was built in the 16th century in the Scossicci district of Porto Recanati. It was dedicated to navigators, fishermen and travelers. A kind of flag/weather vane adorned the roof, called banderuola in Italian, hence the name of the church la Chiesa della Banderuola.

The building you see today, however, dates from the mid-20th century. The original material was also used during the renovation.

Unfortunately, when Isabelle visited it was closed, and it was not clear where one could possibly ask for a key. Yet she noticed that the plants around it were still nicely cared for. The view of the final location of the Maria house, namely Loreto and on the other hand on the Monte Conero, made the visit worthwhile!

Do you also want to go there? These are the coordinates. 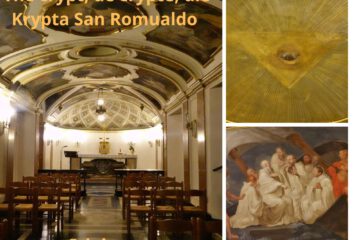